FOR COMBAT MEDICS
Medsanbat
Victor & Elena Pinchuk project for training medics in the ATO
On the September, 10, 2014 Victor and  Elena Pinchuk announced the beginning of a project of training and supplying medical battalions – combat medics that will be deployed in the ATO for rotation as part of the active combat units.
Video tutorial

Medsanbat announces registration for the new course for combat medics
6 November, 2014 22:28
We announce registration for four-day Medsanbat course that will take place in Kyiv, on the campus of the Main Military Clinical Hospital (entrance from Shchorsa lane) 11 through 14 Nov (9.30-17.00). The program will be adapted to the specific character of the injuries that Ukrainian doctors see in the ATO zone. Trainings will be conducted with Ukrainian consultants and foreign experts. To participate in the training please fill in the application before 18.00 Nov, 10 and send it to: info@medsanbat.info.→

Oct 31 a briefing dedicated to the results of the first stage of Elena and Victor Pinchuk project Medsanbat took place in the Main Military Clinical Hospital. 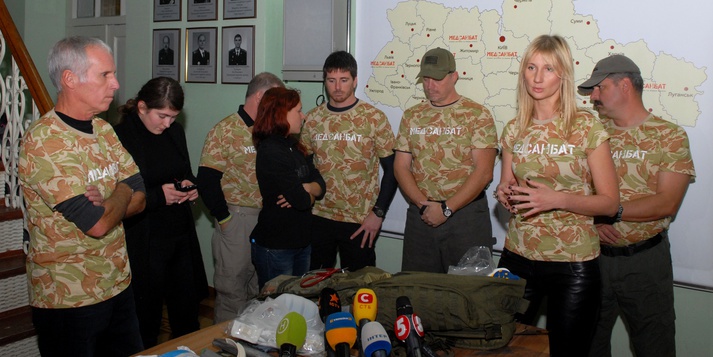 During the first month of the project in cooperation with the Ministry of Defence of Ukraine 500 combat medics took the full course of special tactical training that enables to save lives of Ukrainian soldiers and reduce the percentage of disabled and of amputations on the battlefield and 200 medics took the shortened course.

The training was organi zed according to NATO standards directed by American instructors, each of which has an impressive experience of medical practice in active special forces units. At the briefing they told about their work in Ukraine and about the problems that our medics encounter on battlefield.

During the three weeks of work of the project hundreds combat medics went through Medsanbat training in Kyiv, Mariupol, Sloviansk, Dnipropetrovsk, Kuibyshevo, Khmelnytskyi, Zhytomyr and Lviv. In November the new stage of the course begins, when Ukrainian instructors who took the full course will be teaching their counterparts the modern principles of medical care before the casualty gets into a MFH or a static medical facility.

Registration to all trainings is open and transparent – either via Facebook page (www.facebook.com/medsanbat), via the project website (www.medsanbat.info) or via phone if military doctors are in the battle zone and don’t have Internet access. Still most students are sent by the Ministry of Defence or by the coordinators of antiterroristic units.

Trainings take place in hospitals in static auditoriums as well as in mobile field hospitals, on training grounds where the units fighting in the ATO are deployed.

Combat medics who were deployed or returning to the ATO after completion of the full course following the decision of instructors were issued 50 medic begs, fully equipped with drugs and medical tools according to the NATO standards to provide first aid in combat situations. Another 50 bags are coming into Ukraine now.

Medsanbat provides training participants with tactical kits for combat medics. 25 of such begs went into the ATO with the participants of the first training. Each bag is a mini-hospital. More than 100 items that can be used for first aid and even for operation.

Course program is transforming every time depending on the time that combat medics can leave their service in units and on the level of training of the participants. But it is always adapted to the specific character of trauma and wounds that Ukrainian doctors see in the ATO zone.

The program includes airway management skills, chest injuries, training with manikins, IVs and injection practice on each other.

There is an obligatory hands-on training on fractures, abdominal injuries, head and spine injuries, hypothermia cases. Training on drugs use are done, ergonomic packaging of a tactical kit.

More than 200 doctors took part in a five-day training, they are either preparing for deployment in Ministry of Defence of Ukraine units or already servicing in the ATO. Training was organized according to the NATO standards with experienced American instructors who have a long experience of providing medical care on the battlefield.

The training took place within the Elena and Victor Pinchuk Medsanbat project in cooperation with the Ministry of Defence of Ukraine. The main goal of the project is to reduce the number of human losses and of disabilities and amputations on the battlefield and in emergency situations.

Training took place on the territory of the Main Military Clinical Hospital in the conditions imitating combat actions and using modern equipment.

Doctors who are sent or returning to the ATO after taking the course were issued medical bags, fully equipped according to NATO standards to provide first aid on the battlefield.

Every bag is a mini-emergency room. More than 100 items that enable to provide first aid to the patient or even do an operation. 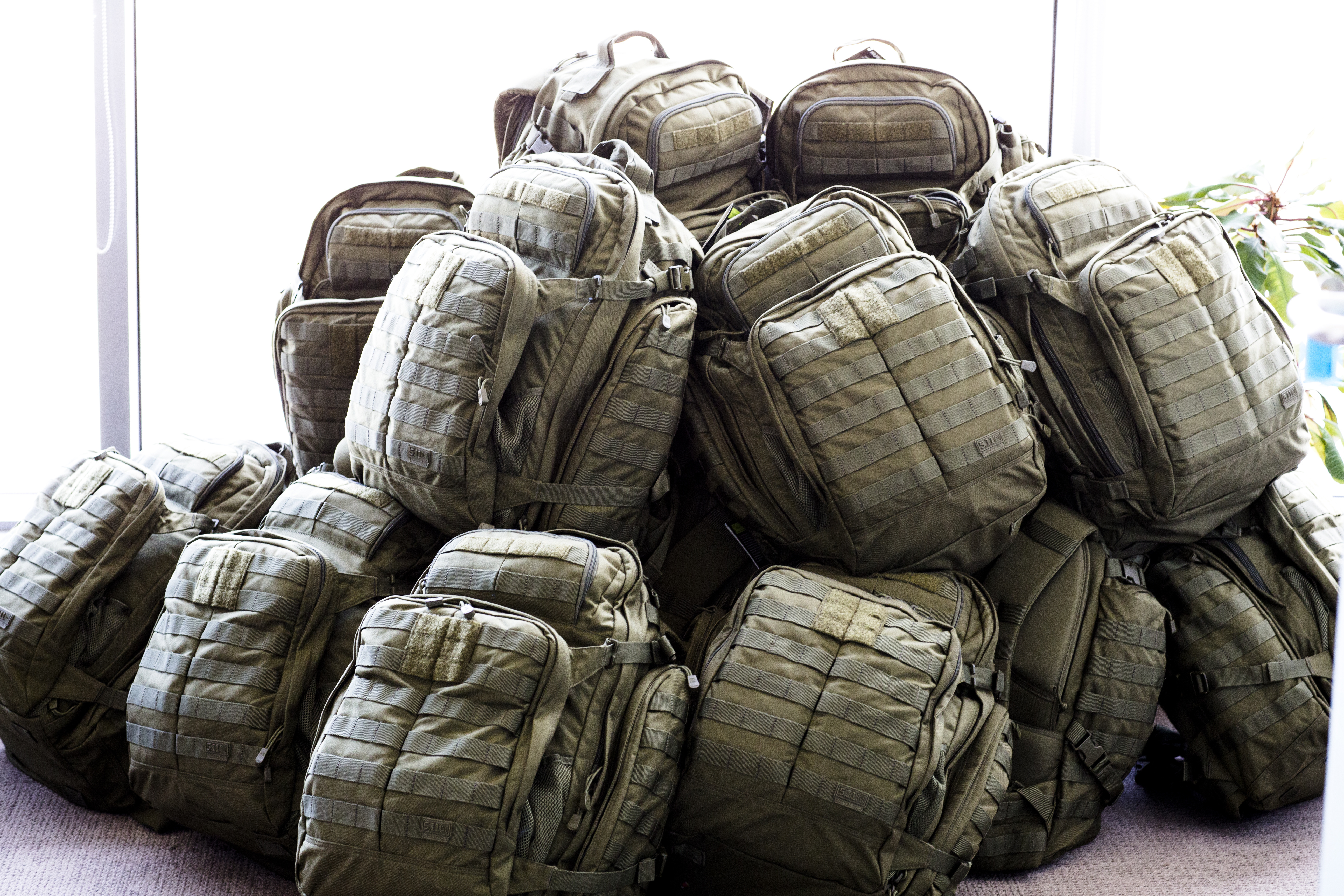 The doctors who took the training and are going into the rear will be doing tactical medicine trainings teaching their colleagues the modern principles of providing medical aid before the patient gets to MFH or a static medical facility. The plan is to train more than 500 medics in the first month.

The five-day course program was maximally adapted to the specific character of trauma and wounds that Ukrainian doctors see in the ATO, with the active participation of local consultants and frequent work of foreign experts on the frontlines.

All classes conducted within the frame of TCCC course and ATLS were divided into five modules.

The project is implemented in cooperation with the Military Medical Department of the MoD and in partnership with the Ukrainian World Congress within the project Patriot Defence (www.patriotdefence.org) that is already doing active training for soldiers providing IFAKs and initiated the project of combat medics support.
First Medsanbat training – photo report
Photogallery
1 from 15 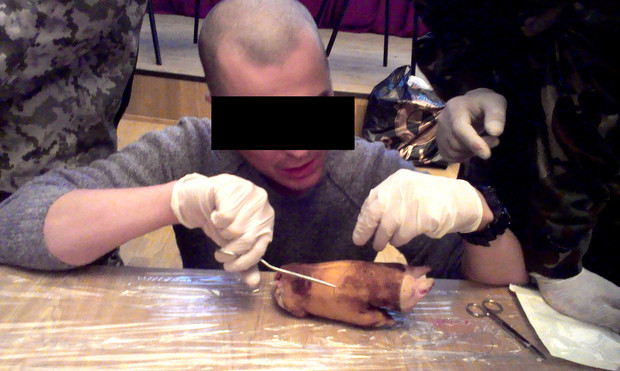 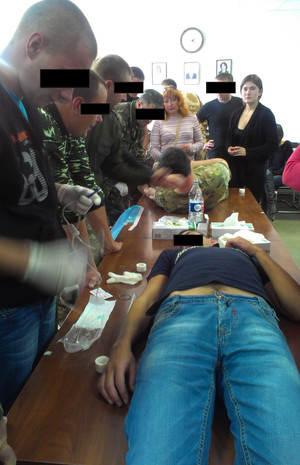 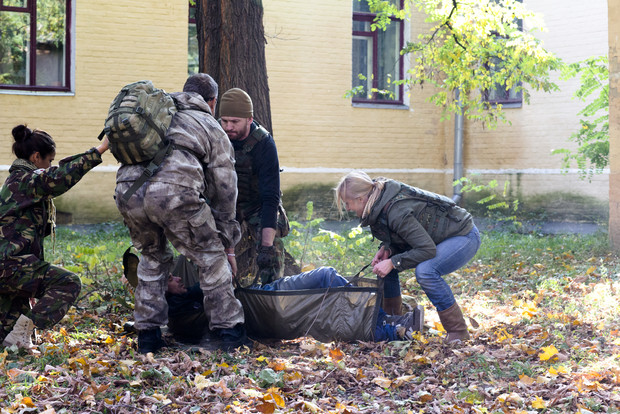 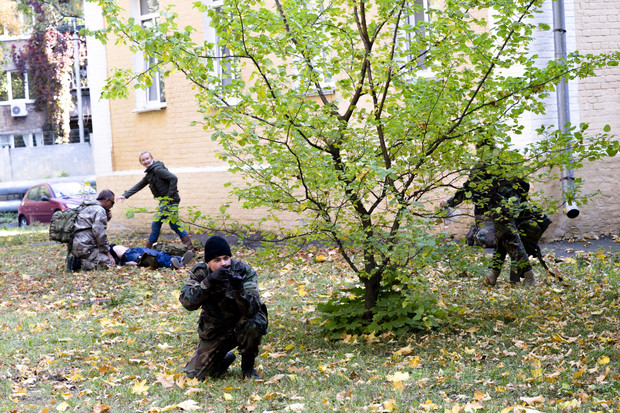 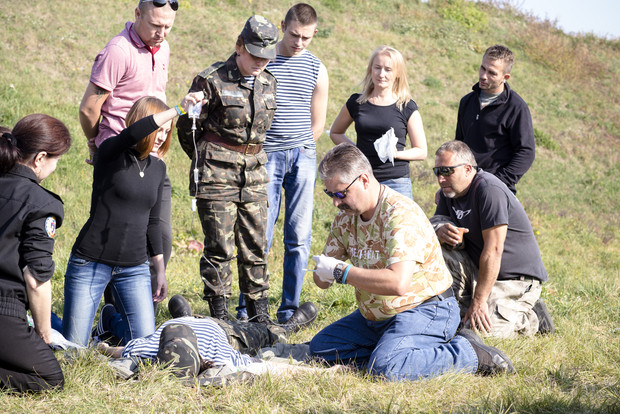 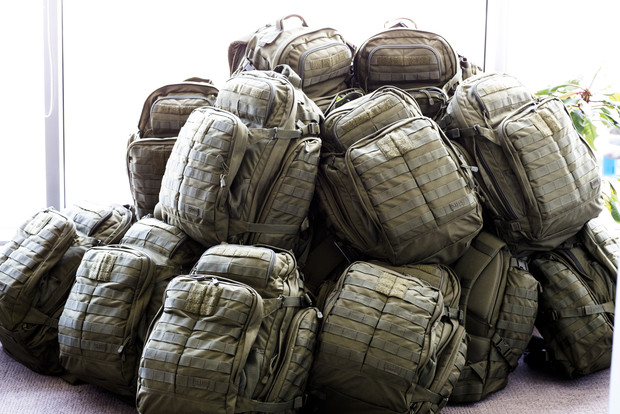 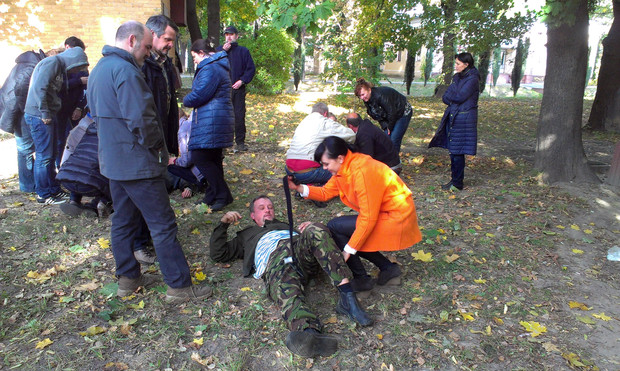 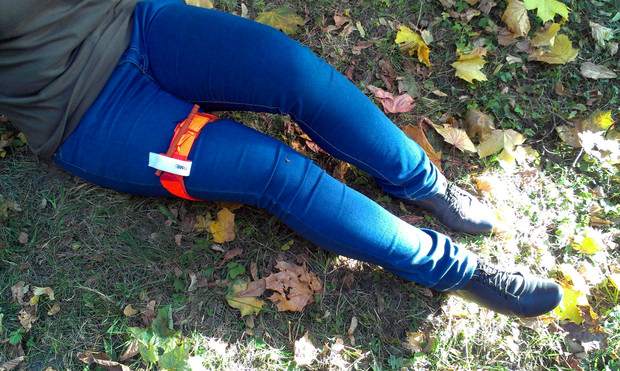 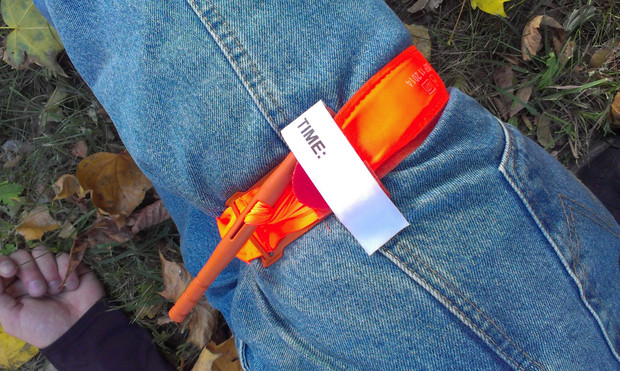 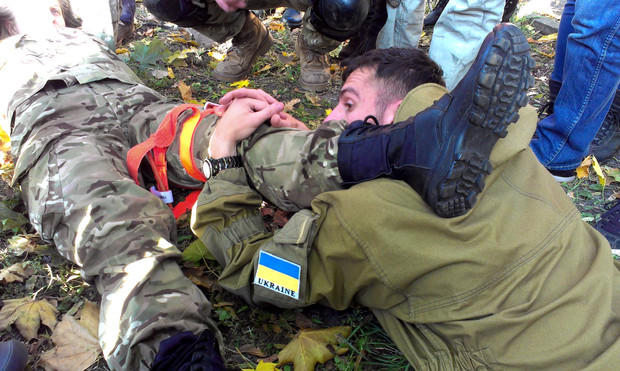 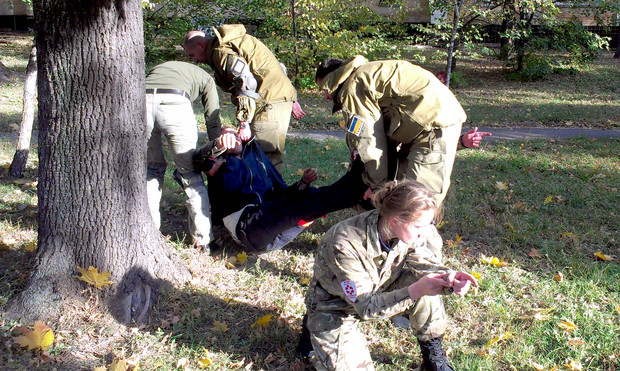 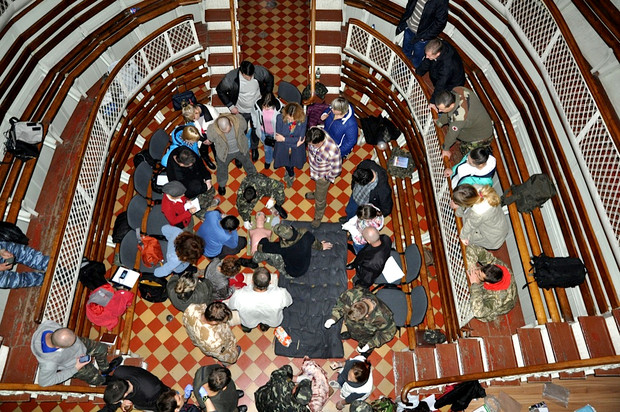 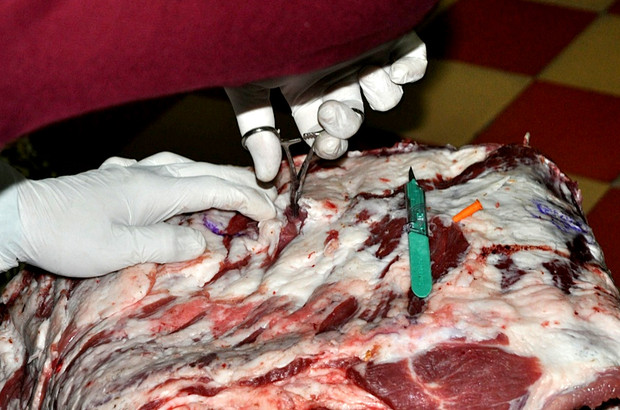 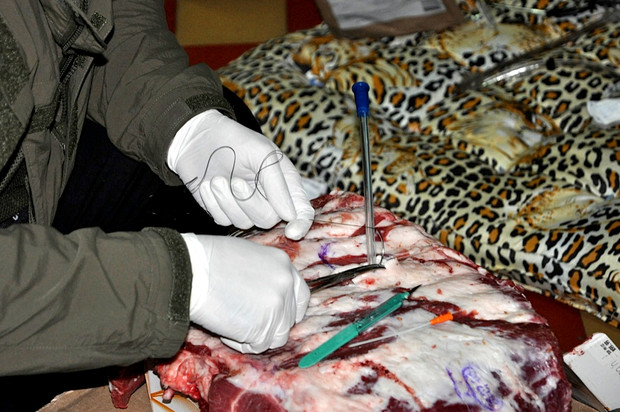 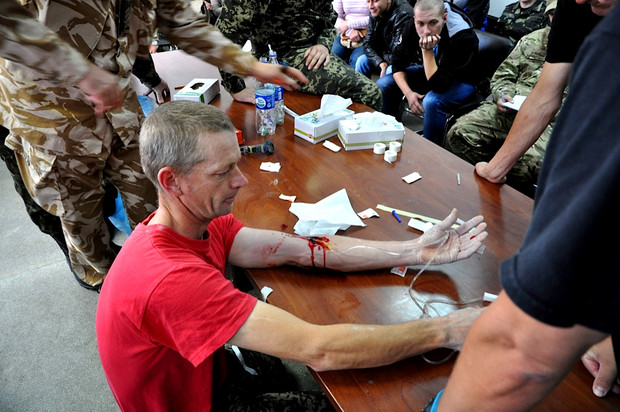 Modern principles of first aid on the battlefield

In the time of ceasefire and less intensive combat action a medsanbat training program begins, within which foreign experts will teach Ukrainian medics the modern principles of first aid on the battlefield and in case of emergency situations. All trainings will be conducted in conditions as close to combat situation as possible with use of modern simulators and equipment. The main goal is to prepare medics to provide full complex of first aid till the patient is admitted to a field hospital or a static medical facility. As a result the number of losses on the battlefield and in emergency situations will be reduced and the number of amputations and disabilities will be much lower.

First trainings of the project are to start in the early October. As more specialists will be trained the project will expand with Ukrainian instructors who have been trained by foreign experts. It is planned to train more than 500 medics in the first months.
The intensive training course that Ukrainian doctors will take includes skills on tourniquet application, evacuation from the battlefield, splinting, usage of certain drugs and pleural decompression. These procedures are the most common on the battlefield and in emergency situations, they are rarely used in ordinary life. With properly trained medics and all necessary medical tools available doctors can not only save vital organs but also save life after severe injury.

“Whit lab coats do not have shoulder marks but a combat medic is a separate combat unit. He should have all the necessary skills, knowledge and tools to save life and health of everybody who needs his help,” Victor Pinchuk said. “An army can be strong and confident only if every soldier knows that there is a doctor behind him ready to help at any moment”.

“The direction that needs us most these days”

“My foundation has been dealing with AIDS problems in Ukraine for more than 10 years. With the beginning of the military conflict we made a decision to expand our work and direct our efforts in the direction that needs us most these days,” Elena Pinchuk said. “The main priority today is to save life and health of those who are doing everything they can to save our state for us”.

The program will be implemented in partnership with the Ukrainian World Congress within its Patriot Defence project (www.patriondefence.org), that is already actively training for soldiers providing individual aid kits and initiated the project of combat medics support. Ukrainian Philanthropic Marketplace is ready to join the implementation of the program.

According to the assessment of independent experts the system of medical care on the battlefield in the ATO does not meet the key requirements used in NATO army and in Israel.

Mobile and field hospitals do not meet international standards, most of their equipment is outdated and does not meet basic requirements, especially in the situation when the load on one mobile hospital is up to 300 surgical operations a month.

Evacuation of the injured from the battlefield is associated with great risk, evacuation to hospitals is complicated and medical aid is sometimes delayed up to 12 hours instead the necessary 60 minutes.

Providing soldiers with individual aid kits, trained doctors with necessary medicines and medical equipment and the existence of a system of evacuation and transport of the wounded to mobile and static hospitals we can reduce mortality among the military contingent significantly and save health to thousands of defenders of Ukraine.