Its goal is to help girls and young women who are spend most of their lives on the street and so are highly vulnerable to HIV, to gain access to HIV testing and to receive vital social, medical and legal assistance. The project is implemented by the global health and human rights organization HealthRight International, with the generous financial support of the Elton John AIDS Foundation, which is supported by the Elena Pinchuk ANTIAIDS Foundation.

Estimates place the number of children and young people living on the streets of Ukraine, mostly within big cities, at anywhere between 20,000-100,000.

Sir Elton John, founder of one of the biggest foundations fighting AIDS and Elena Pinchuk, founder of the ANTIAIDS Foundation, presented to media their new project and gave a brief update about the results to date of their three-year cooperation in Ukraine.

"We want to help thousands of girls to come up from the basements where they are cold, where they are exposed to violence, get infected with HIV and give birth. We want to bring them back to life. And we want them to know that a new life is possible. With the help of the project's centre, and advice from psychologists, help from medical workers and lawyers, this is possible", - said the founder of the ANTIAIDS Foundation Elena Pinchuk.

The two and a half year project, which is coordinated by the two Foundations and HealthRight, began in Kiev in February 2010, with the goal of building Ukrainian systems, capacity, and commitment to improve access to vital social, medical, and legal services for girls and young women who are vulnerable to HIV. 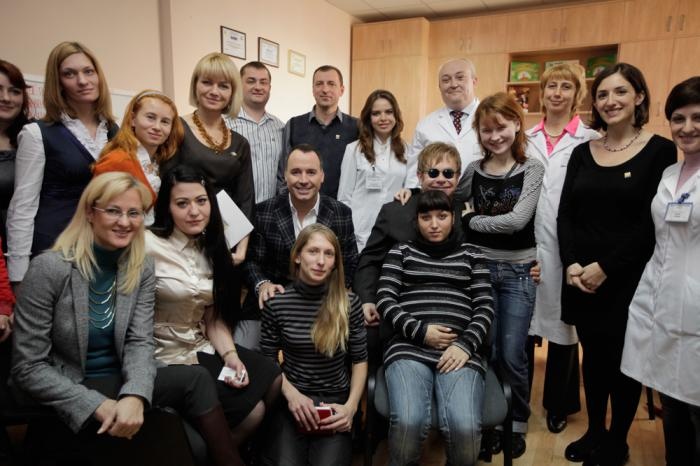 The project is designed to help homeless and street-involved girls and young women between the ages of 14 and 24, including those who are deprived of parental care; graduates of orphanages; living in crisis shelters, internats or vocational schools; recently incarcerated; or involved in sex work. This population is at very high risk of HIV infection, and lacks access to medical, psychological and psychosocial care due to stigma and discrimination, financial barriers, and lack of legal residency or identity documents.

"We want to help thousands of girls to come up from the basements where they are cold, where they are exposed to violence, get infected with HIV and give birth. We want to bring them back to life. And we want them to know that a new life is possible", - ЕлElena Pinchuk.

In April 2010, the project established the HealthRight Service Center for Girls and Women, in partnership with the Kiev City Center of Social Services for Family, Children and Youth. This partnership ensures the project's sustainability beyond the involvement of EJAF and EPAAF. During the past 18 months, more than 500 girls and young women have received care in the Service Center, which includes psychological, psychosocial and legal counseling; basic medical services, with referral for more advanced care; HIV-prevention education; facilitated access to drug rehabilitation, housing and state entitlements; assistance accessing education and employment; and support reestablishing communication with family members. All Service Center clients have access to HIV counseling, testing and referral, and 231 girls and women have been tested, with 47 (20%) testing HIV-positive. Thirty-nine of those testing positive have registered at the City AIDS Center thus far, including those who do not have identity documents. To enhance access for vulnerable youth, HealthRight also developed a referral network, which currently includes 43 state and non-governmental service providers.

In 2008, HealthRight International jointly with the U.S. Centers for Disease Control and Prevention (CDC) and with support from the Elton John AIDS Foundation, conducted a survey on HIV prevalence and risk behaviors among street children and youth, ages 15-24, in Kiev, Odessa, and Donetsk. Research data showed alarmingly high levels of HIV infection among this population in all of three cities: Kiev - 18.7%, Odessa - 26.7%, Donetsk - 9.8%. Many of those who participated in the study were half-orphans or double orphans: Kiev - 49%, Odessa - 60%, Donetsk - 59%. Street girls and young women, who accounted for 24% of children and young people in the study, were found to be a particularly vulnerable subgroup of street youth. Many reported having more than one sexual partner at a time, and a significant number had been forced to have sex at least once. At the time of the study, some of the study participants were pregnant, but had no access to medical care and psychological support.

"Protecting young women and girls is the key to ending the AIDS epidemic around the globe" commented Sir Elton John, Founder of EJAF. "Their physical, social and economic vulnerability to sexual exploitation and hence HIV makes it essential to find additional ways to support and protect them. This programme does just that".

The results of the "Children Plus" Project

The joint project of the Elena Pinchuk ANTIAIDS Foundation and the Elton John AIDS Foundation called "Children Plus" has been already working in Ukraine for three years. The goal of this five-year project which is implemented by the All Ukrainian Network of People Living with HIV is to improve the lives of children born to HIV-positive mothers; integrate them into their social environment, change society's attitude towards these children and help them move from orphanages to foster families, new parents and guardians.

"Children Plus", a five year project, was launched in February 2008. It is implemented in 11 regions of Ukraine. Specialist technical support on disclosing HIV-positive diagnosis between parents and their children is provided by the Romanian Angel Appeal; one of the foremost agencies in Europe in this area. The financial input of the Elena Pinchuk ANTIAIDS Foundation is 2,5 mln USD. The Elton John AIDS Foundation provides financial and management oversight and resources and secured an additional 500,000 from the UK's Big Lottery Fund.

Critical to the progrmame is supporting vulnerable families to prevent their collapse and the ultimate institutionalization of children. To date the project has prevented the institutionalisation of 1 442 children (the goal by 2013 is 1 500 children) with HIV-positive parents from families in crisis. These children have stayed with their biological families due to the help of psychologists, social workers, and lawyers, who have collectively provided case management for the family and engaged children's parents in self-support groups and parenting schools.

893 children have gone through the process of "status disclosure" (by 2013 this is set to rise to 1 000 children) which is critical to treatment adherence and life long self esteem and responsible sexual behaviour.

The Elton John AIDS Foundation (EJAF) (http://www.ejaf.com/ one of the world's leading nonprofit organizations supporting innovative HIV/AIDS prevention education programs and direct care and support services to people living with HIV/AIDS. Since its founding in 1993, EJAF has raised over $225 million to support its programs in 55 countries around the globe. The Foundation currently manages a porfolio of £27m live projects in 11 countries, providing services to over 1m people. The Foundation supports its work, by organizing special events, individual marketing projects, voluntary contributions of individuals, organizations and foundations. For more information please contact: Anne Aslett, Executive Director,anne.aslett@ejaf.com

The ANTIAIDS Foundation (www.antiaids.org) was founded by Elena Pinchuk in 2003. Today this is the first and sole charitable organization committed to fighting against AIDS in Ukraine operating on private donations. During eight years of its work the Foundation deals constantly with the problems of the HIV-positive children.

15 deposit accounts with the sum of 5 000 USD were opened by the Foundation for the families that adopted HIV-positive children.

A house and an apartment were bought by the Foundation to improve living conditions of two families that adopted eight HIV-positive children in Makeyevka.

The Foundation supports the orphanages with HIV-positive children reconstructing them, buying pieces of furniture and equipment for the orphanages in Kiev ("Berezka") and Kharkov ("Zeleniy Gai"), repairing and rendering financing the Makeyevka specialized orphanage and the infectious disease clinic of the Kiev maternity hospital where HIV-positive women stay.

The Foundation helps the orphanages in Odessa and Belaya Tserkov, children's centre in Zaporozh'ye, Dnepropetrovsk and Nikolayev, infectious disease clinic and department for HIV/AIDS disease treatment in Kiev and Chernigov, the Ukrainian Children's Cardiac Center. The Foundation organized office day care center for children with HIV/AIDS in Kyiv City AIDS Center. Also five mobile clinics were purchased and equipped to grant thousands of HIV-positive children with regular access to the qualified help of pediatricians and infectiologists in the most distant areas, in Nikolayev, Odessa, Donetsk, Dnepropetrovsk, Kiev regions and in the Crimea.

HealthRight International is a global health and human rights organization working to build lasting access to health for excluded communities. We work closely with communities and establish local partnerships to deliver health services. At the same time, we provide training and equipment and improve systems to enable our partners to deliver services on their own. Our goal is to create lasting change that supports access to health while strengthening human rights.

Our projects address health and social crises made worse by human rights violations, with a particular focus and expertise on:

Since its founding in 1990 by the late Dr. Jonathan Mann, HealthRight has worked in over 30 countries, with current projects in Asia, Africa, Eastern Europe, and the United States.