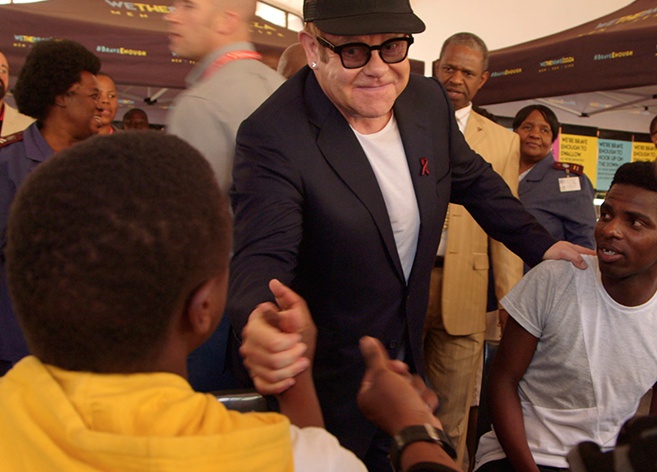 Although being gay in South Africa is legal, traditional attitudes still stigmatise gay people and discourage them from seeking treatment. Gay men are up to 20 times more likely to be infected with HIV than the general population and avoid health clinics where their sexuality may be discovered. The Health 4 Men programme not only provides safe spaces for gay men to seek treatment, but also changes attitudes through public awareness campaigns. Over 100 health facilities are already part of the programme across South Africa.

Elton was in Durban for the 2016 International AIDS Conference which is a biennial gathering of leading clinicians, researchers and activists committed to ending AIDS. Recollecting on the last time the conference was held in South Africa in 2000, Elton said;

“We have come a long way since then. I can remember going to a restaurant and LGBT people there would not even have their photograph taken with me as they were scared people would therefore know they were homosexual. Now we have Gay Pride being held here this weekend.

“But there is still work to do. We cannot take our foot off the accelerator. We must get rid of the stigma – the stigma against LGBT people, the drug users and sex workers. They are the ones at risk of being left behind. This is why my Foundation is focusing on them.”

Attending the conference, Elton announced the first wave of grants for LGBT people at risk of HIV provided by a joint fund with the United States Government. The ‘LGBT Fund’ enables all donations to the Elton John AIDS Foundation to be matched by the American government up to £3.8m.