Raised funds will be directed to equip intensive therapy unit in Lavra where people from all over Ukraine come to get qualified medical care. “We planned for a long time to improve conditions in clinic, - Svetlana Antonyak said, head of in-patient AIDS department. – We as doctors do our best, but sometimes our efforts are vain without equipment, medicines and patients’ hope of recovery. When we learnt about the amount of funds raised, all doctors were very happy. Now in addition to the belief in our strength we’ve got the confidence that hundreds of patients that didn’t have chance to survive, will be saved”.

In the beginning of the auction Elena Pinchuk reported about distribution of the funds raised during previous auction (detailed information can be downloaded on the ANTIAIDS Foundation web site). 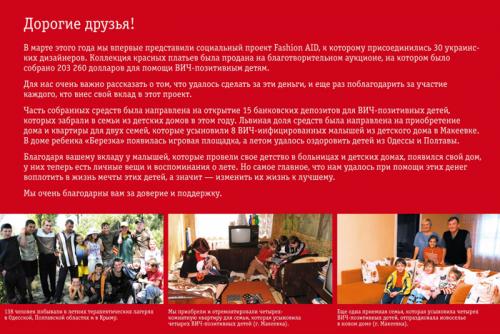 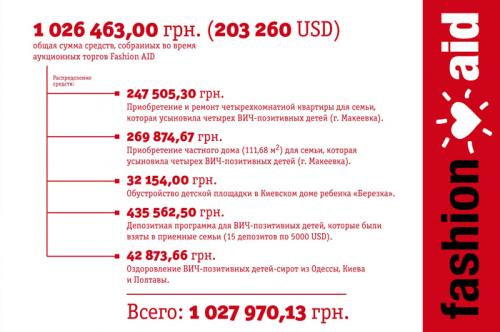 Biddings for thirty lots continued two and a half hours and highlighted on-line in the Internet. As the result of the fight between participants of the auction starting prices (100 ? per item) grew on average in 121 times.

Love Fashion AID collection was demonstrated on October, 16 2007 in frames of Ukrainian Fashion Week. “HIV/AIDS is not a verdict. Live is going on! And the happiness is real!” – The project participants claimed. That day many Ukrainian celebrities took part in the defile. Miss World Tat’ana Kucharova was the last who had come on the stage that evening. She wore a crown with diamonds and a dress from Larisa Lobanova. But the main participants were two married couples one affected by HIV. Their participation in the show was the strongest evidence that life is going on after HIV diagnosis! Catalogue and photo report from the show you can see and download on ANTIAIDS Foundation site.

That was already the second fashion show of Ukrainian designers organized in the context of ANTIAIDS Foundation project Fashion AID and aimed to support people living with HIV. The first collection created by Ukrainian designers was represented in March, 2007 during Ukrainian Fashion Week. At that time 30 designers united to claim their social position and created red attires dedicated to the fight against AIDS. That collection was sold on charitable auction organized by ANTIAIDS Foundation and raised 203 260 USD. These means were spent to support two families that fostered eight HIV-positive children. That was precedent for Ukraine, because orphans with HIV diagnosis have never been adopted before. To improve living conditions of these kids Foundation bought house and flat in Makeyevka for these foster families; the part of means directed to the project of financial support HIV-positive children by deposit account, to arrangement of the playground in Kiev orphanage “Berezka”, to summer vacation of HIV-positive orphans from Odessa, Poltava, Kiev. 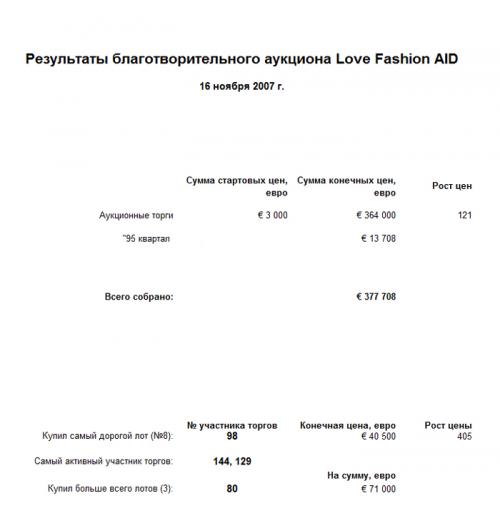