Catalogue and photo report from AIDS Army Fashion show is on fashion.antiaids.org.

Elena Pinchuk, founder of the ANTIAIDS Foundation: "Military style of this project is not a game. War is at its height. And this defile is real military parade that heads to the battle. Celebrities, sportsmen and well-known politicians came for this parade well-armed: their powerful weapon is an influence at the society. They are listened to. It is very important to convert their popularity into saved lives".

Alexey Zalevskiy, designer, show producer: "Designers that took part in this project really care. We feel our social responsibility for our country. We try to change it using those resources we have access to. We speak fashion language about HIV/AIDS and hope to be heard. Our words and our works are our weapons in the war against AIDS. This war we must win".

The catwalk was decorated with the art installation - ticking imitation of sea-mines that created atmosphere of alarm and danger. Sea-mines look like 3D model of human immunodeficiency virus. 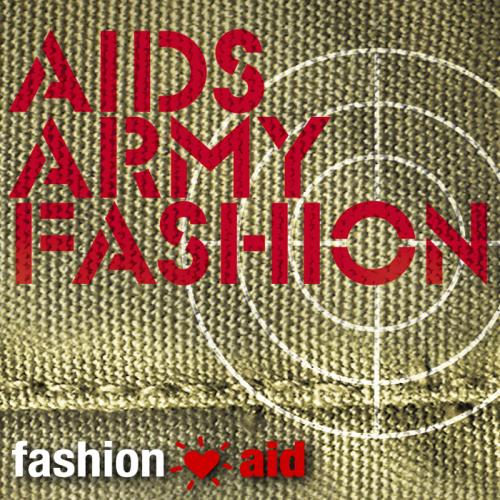 Charitable donations raised due to this project are planned to supply hospitals with mobile clinics for HIV-positive children.

It is the third time when Elena Pinchuk ANTIAIDS Foundation presented social collection branded Fashion AID in the context of UFW.

October, 2007. Fresh wind of the project Fashion AID: Ukrainian celebrities together with HIV-positive people stepped at the catwalk of UFW. For the first time in Ukrainian fashion history present Miss World 2006 - Tatyana Kucharova - took part at the defile. "HIV/AIDS is not a verdict. Live is going on! And the happiness is real!" - 38 designers claimed and presented wedding collection Love Fashion AID. It symbolized hope that lived in the thousands hearts of HIV-positive people. This collection broke the record of Ukrainian charitable auctions - 535 000 USD were raised during the biddings.  Funds were directed for the reconstruction works of Lavra clinic that is the basis of research activities and treatment of the most difficult HIV/AIDS cases in Ukraine. Intensive therapy unit of the clinic was equipped with the latest technics. Doctors got consumables necessary for equipment' functioning during the year and means of individual protection. But the most serious purchase was device necessary for HIV-positive people immunity status analysis (particularly CD-4 lymphocytes). And it is the first device in Ukraine which represent new generation of labware. Part of the sum was directed for the reconstruction of the Kiev maternity hospital where HIV-positive women stay.