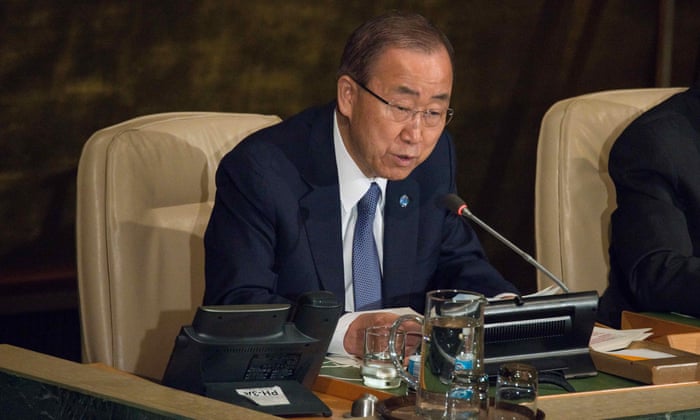 Activists walked out in protest after the resolution was adopted on the first day of the three-day summit, which had already been the subject of intense criticism for excluding gay and transgender organizations. More than 50 countries, including Russia, Saudi Arabia and Iran, blocked 22 groups from attending the conference.

“There’s no way we can end this epidemic by 2030 without providing services and, in some countries, acknowledging the existence of these vulnerable communities,” said Amanda Lugg, the director of advocacy at the African Services Committee.

The document adopted on Wednesday is not legally binding, but it is used as a tool, particularly in developing countries, by activists who can point to it to say certain services must be made available.

Transgender people, men who have sex with men, and sex workers are each mentioned only once in the 26-page document to explain that these populations have the global distinction of being the most at risk for contracting HIV. People who inject drugs are referenced three times, though there are allusions to drug abuse.

Groups that represent these at-risk populations are also ignored in a section that emphasizes the importance of those who have responded to the crisis, including governments, faith-based groups and youth-led organizations.

These few references also mean the 193-member states have a substantially smaller obligation to provide domestic funding for services that target those most vulnerable to HIV and Aids, which is in decline though 36.7 million people worldwide are living with the disease.

“It was 35 years ago plus two days that the world first heard about Aids – and 15 years now since the first high-level meeting on Aids – and we’re still dealing with the same idiocy regarding the criminalization of these groups,” Lugg said.

Meg Davis, a visiting scholar at the NYU school of law whose research is focused on global health aid, said the near complete omission was in keeping with the earlier move to block rights groups from attending the meeting.

“It is a backlash from some UN member states that have been unhappy to see key population groups becoming more empowered, more vocal, exercising their rights, defending their rights,” Davis said. “And now they are trying to take that space away and it’s distressing that allied states didn’t do more to prevent that from happening.”

More than 50 countries, including Russia and the Organization of Islamic Cooperation (OIC), blocked 22 LGBT and drug user groups from participating in the meeting. UN rules allow any of the member states to veto an NGO’s participation for any reason. Some representatives from the blacklisted groups were still able to attend because of assistance from other governments and NGOs.

This exclusion did not go ignored at the general assembly podium. The UNAids executive director, Michel Sidibé, told the assembly: “We cannot afford to silence their voices as we work toward ending the Aids epidemic.”

Ndaba Mandela, Nelson Mandela’s grandson, said: “Bigotry and fear do nothing but spread the virus.”

And the assembly president, Mogens Lykketoft, made an unscheduled appearance at an event held on Tuesday to discuss the negative impact of this exclusion. Lykketoft said he was “sorry” about what had happened and that his office had negotiated the list down from 39 blocked organizations to 22.

Daria Mogucheva was selected to attend the meeting to represent the Eurasian Network of People Who Use Drugs (Enpud), one of the 22 blocked groups. She said they were surprised to be denied access because representatives attended the UN meeting on drugs in February.

She said that blocking people from the event means that people who use drugs will be neglected in the response to the epidemic. “They should get their chance to deliver to their governments that there’s no way of ending Aids unless their rights for health is respected by everyone,” Mogucheva said in an email.

Dane Lewis, executive director of the Jamaica Forum for Lesbians, All-Sexuals and Gays (J-FLAG), was also blocked from attending but made it into the session with the support of other NGOs.

He laughed when asked whether the UN could meet its 2030 goal while minimizing the participation of these groups. Lewis said: “I don’t know if the UN can meet that – certainly not alone, which is one of the reasons why we need to ensure that all populations are included in the process.”

19 May, 2016 16:35
UNAIDS calls for sustained investment and increased collaboration to develop an HIV vaccine