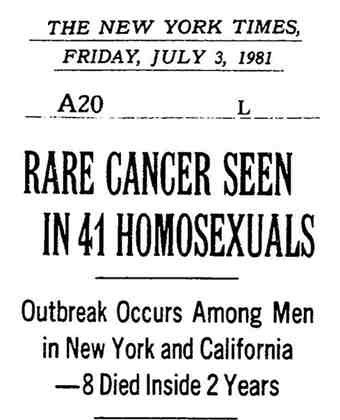 Doctors in New York and California have diagnosed among homosexual men 41 cases of a rare and often rapidly fatal form of cancer. Eight of the victims died less than 24 months after the diagnosis was made.

The cause of the outbreak is unknown, and there is as yet no evidence of contagion. But the doctors who have made the diagnoses, mostly in New York City and the San Francisco Bay area, are alerting other physicians who treat large numbers of homosexual men to the problem in an effort to help identify more cases and to reduce the delay in offering chemotherapy treatment.

The sudden appearance of the cancer, called Kaposi's Sarcoma, has prompted a medical investigation that experts say could have as much scientific as public health importance because of what it may teach about determining the causes of more common types of cancer. First Appears in Spots

Doctors have been taught in the past that the cancer usually appeared first in spots on the legs and that the disease took a slow course of up to 10 years. But these recent cases have shown that it appears in one or more violet-colored spots anywhere on the body. The spots generally do not itch or cause other symptoms, often can be mistaken for bruises, sometimes appear as lumps and can turn brown after a period of time. The cancer often causes swollen lymph glands, and then kills by spreading throughout the body.

Doctors investigating the outbreak believe that many cases have gone undetected because of the rarity of the condition and the difficulty even dermatologists may have in diagnosing it.

In a letter alerting other physicians to the problem, Dr. Alvin E. Friedman-Kien of New York University Medical Center, one of the investigators, described the appearance of the outbreak as ''rather devastating.''

Dr. Friedman-Kien said in an interview yesterday that he knew of 41 cases collated in the last five weeks, with the cases themselves dating to the past 30 months. The Federal Centers for Disease Control in Atlanta is expected to publish the first description of the outbreak in its weekly report today, according to a spokesman, Dr. James Curran. The report notes 26 of the cases - 20 in New York and six in California.

There is no national registry of cancer victims, but the nationwide incidence of Kaposi's Sarcoma in the past had been estimated by the Centers for Disease Control to be less than six-one-hundredths of a case per 100,000 people annually, or about two cases in every three million people. However, the disease accounts for up to 9 percent of all cancers in a belt across equatorial Africa, where it commonly affects children and young adults.

In the United States, it has primarily affected men older than 50 years. But in the recent cases, doctors at nine medical centers in New York and seven hospitals in California have been diagnosing the condition among younger men, all of whom said in the course of standard diagnostic interviews that they were homosexual. Although the ages of the patients have ranged from 26 to 51 years, many have been under 40, with the mean at 39.

Nine of the 41 cases known to Dr. Friedman-Kien were diagnosed in California, and several of those victims reported that they had been in New York in the period preceding the diagnosis. Dr. Friedman-Kien said that his colleagues were checking on reports of two victims diagnosed in Copenhagen, one of whom had visited New York. Viral Infections Indicated

No one medical investigator has yet interviewed all the victims, Dr. Curran said. According to Dr. Friedman-Kien, the reporting doctors said that most cases had involved homosexual men who have had multiple and frequent sexual encounters with different partners, as many as 10 sexual encounters each night up to four times a week.

Cancer is not believed to be contagious, but conditions that might precipitate it, such as particular viruses or environmental factors, might account for an outbreak among a single group.

The medical investigators say some indirect evidence actually points away from contagion as a cause. None of the patients knew each other, although the theoretical possibility that some may have had sexual contact with a person with Kaposi's Sarcoma at some point in the past could not be excluded, Dr. Friedman-Kien said.

Dr. Curran said there was no apparent danger to nonhomosexuals from contagion. ''The best evidence against contagion,'' he said, ''is that no cases have been reported to date outside the homosexual community or in women.''

Dr. Friedman-Kien said he had tested nine of the victims and found severe defects in their immunological systems. The patients had serious malfunctions of two types of cells called T and B cell lymphocytes, which have important roles in fighting infections and cancer.

But Dr. Friedman-Kien emphasized that the researchers did not know whether the immunological defects were the underlying problem or had developed secondarily to the infections or drug use.

The research team is testing various hypotheses, one of which is a possible link between past infection with cytomegalovirus and development of Kaposi's Sarcoma.