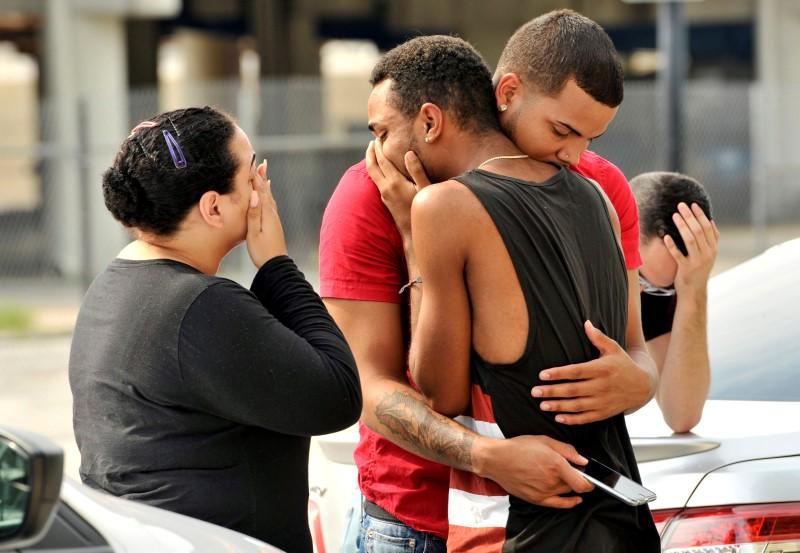 Friends and family members embrace outside the Orlando Police Headquarters during the investigation of a shooting at the Pulse night club, where as many as 20 people have been injured after a gunman opened fire, in Orlando, Florida, U.S June 12, 2016. REUTERS/Steve Nesius

Barbara Poma, whose brother died in 1991, opened Pulse in 2004 with business partner Ron Legler. The venue promoted gay rights and put on events supporting happenings in the gay community, ranging from Come Out with Pride to Gay Games, according to the club's website.

Pulse's patrons and others in Orlando's gay community were reeling on Sunday after a gunman killed 50 people and wounded 53 others overnight in what police said was a targeted, well-planned attack.

The shooter, who held off police for three hours before a SWAT team killed him, was identified as Omar S. Mateen, a Florida resident who might have had leanings toward Islamic State militants, a senior FBI official said.

"This is a week I'll be going to funerals all week long. I don't even know who was there, but I know I'll know them," said Raymond Michael Sharpe, 55, a bartender at another gay bar, who has spoken to Pulse employees and patrons who survived the shooting.

He said Poma is alive, as was Pulse manager Cindy Barbalock, who got out and got home. Reuters was not able to reach Poma by phone on Sunday and Legler declined to speak when he was contacted.

Hundreds of people sent prayers, thoughts and condolences on the club's Facebook site.

Pulse bartender Juan Orrego said on his Facebook page: "I'm home. OK. I only got shot in the leg. Thank u everybody for your prayers."

The shooting happened at 2:00 a.m., toward the end of one of the club's popular Latin nights, with bachata, merengue and salsa music. Many of the family members seeking their loved ones at local hospitals after the shooting were Hispanic.

One regular said he lost friends who were frequent patrons.

"There were faces we had seen all the time," Luis Burbano told CNN, describing how he and his friends got out alive and tried to help the wounded. "We heard about mutual friends who did not make it."

"One of our longtime bartender friends was in a small little fitting room with 10 other people, hiding in there, waiting for a miracle, waiting for someone to come in and rescue them."

(Additional reporting by Justin Madden in Chicago; Writing by Fiona Ortiz in Chicago; Editing by Frank McGurty and Nick Zieminski)