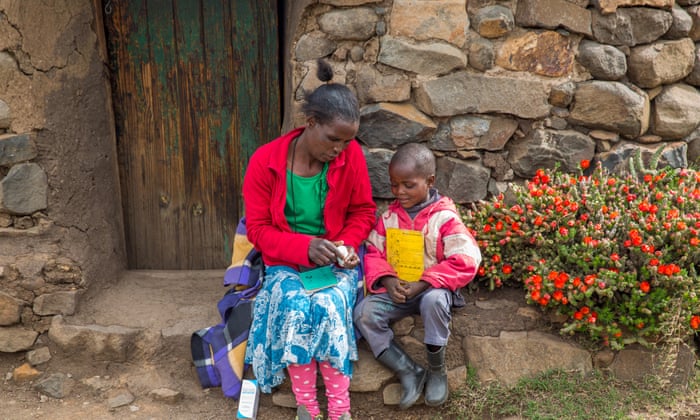 Maboe Ntsime and her son, Motsamai, had to make an arduous journey for HIV treatment but now access is much easier thanks to a programme using mobile phone technology. Photograph: Vodafone Foundation

Maboe Ntsime remembers well the ordeal she used to go through to receive the regular treatment she and her six-year-old son, Motsamai, depend on as people living with HIV.

“It was exhausting because I walked,” recalled the mother, from Lesotho, where almost 23% of the population live with the virus. “If I left home at 8am I would sleep over somewhere. Otherwise I would get back after dark. I would walk back that distance with my son on my back.”

For Ntsime, the arduous trek she and her son were obliged to take was yet another painful strain on top of the condition, for which she tested positive when she was pregnant with Motsamai.

Now, however, a programme using mobile technology is making it easier for mother and son to access treatment for the virus.

Developed by Vodafone in conjunction with the Lesotho Ministry of Health, the programme combines the mobile money service M-Pesa, which is used in many parts of sub-Saharan Africa, with a smartphone app designed for healthcare professionals.

Travelling clinics provide on-site HIV testing in Lesotho’s remote rural communities where mountainous terrain makes movement slow. Anyone who is identified as HIV-positive can register with M-Pesa and receive the funds needed to pay for transportation to a treatment centre.

Their details are also simultaneously recorded on a central database so that future treatment and care can be planned, recorded and accessed in the field by healthcare workers using an app produced by the company’s charitable arm, the Vodafone Foundation, and Vodacom Lesotho.

The service is oriented towards pregnant women, mothers and young children, who are among the most vulnerable groups in a society where as many as 5,000 children under the age of 14 are estimated to be undiagnosed and living with HIV.

Andrew Dunnett, director of the Vodafone Foundation, said the programme was part of the company’s Connecting for Good programme, which aims to deliver public benefit through the application of technology across the areas of health, education and disaster relief.

“Our initial assessment indicated that a combination of mobile technology, money, management and working with the right partners could deliver a significant impact in Lesotho, where nearly a quarter of the population is HIV-positive, many of whom are children,” he added.

“HIV is an immense healthcare crisis for the people of Lesotho. This pioneering programme will ensure that thousands of mothers and young children in some of the poorest communities in the world receive the care and support they need.”

For mothers like Ntsime, the clinics now mean that she and her son can get treatment within easier reach. “I don’t need to travel far with my son. We visit the mobile clinic once a month. I am grateful for all that is being done. The nurses have really helped by coming nearer to us,” she said, adding that her thoughts were now very much focused on his future.

“What do I hope for him? I hope he [Motsamai] grows up and is healthy.”