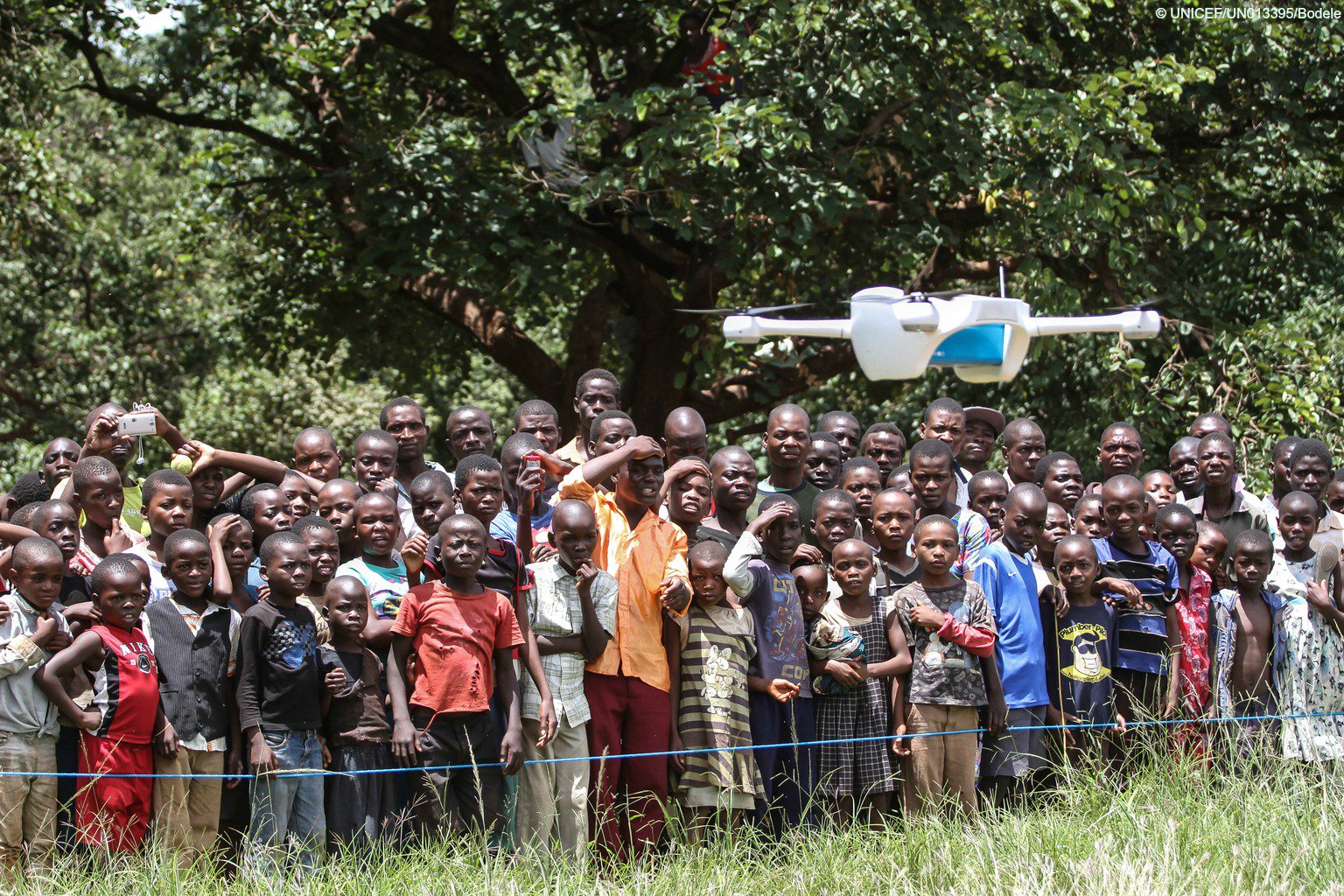 Children look on as UNICEF and the Government of Malawi test the use of Unmanned Aerial Vehicles (UAVs) to reduce waiting times of infant HIV tests. © 2016/UNICEF/Khonje

The first successful test flight completed the 10km route unhindered travelling from a community health centre to the Kamuzu Central Hospital laboratory.  Residents watched as the vehicle took off and flew away in the direction of the hospital. The test flights which are assessing viability including cost and safety, will continue until Friday 18th March.

UAVs have been used in the past for surveillance and assessments of disaster, but this is the first known use of UAVs on the continent for improvement of HIV services.

“HIV is still a barrier to development in Malawi, and every year around 10,000 children die of HIV,” says Mahimbo Mdoe, UNICEF Representative in Malawi. “This innovation could be the breakthrough in overcoming transport challenges and associated delays experienced by health workers in remote areas of Malawi.”

“In 2014, nearly 40,000 children in Malawi were born to HIV positive mothers. Quality care of these children depends on early diagnosis, which requires taking dried blood samples from the health centre to the central laboratory for testing. We hope that UAVs can be part of the solution to reduce transportation time and ensure that children who need it, start their treatment early,” said Mdoe.

In 2014, around 10,000 children in Malawi died from HIV-related diseases and less than half of all children were on treatment. It currently takes an average of 11 days to get samples from health centre to a testing lab, and up to eight weeks for the results to be delivered back. The longer the delay between test and results, the higher the default rate of the patient.

Minister of Health Dr. Peter Kumpalume said the Malawi Government is committed to the prevention of mother to child transmission of HIV.

“Malawi has pioneered a number of innovations in the delivery of HIV services including the Option B+ policy which puts mothers on a simple, lifelong treatment regime. We have also pioneered the delivery of results from the central laboratory to the health facilities through text messages. We believe our partnering with UNICEF to test UAVs is another innovation and will help in our drive to achieve the country’s goals in HIV prevention and treatment.”

Note to editor:
Malawi has a national HIV prevalence rate of 10% - still one of the highest in the world. An estimated 1 million Malawians were living with HIV in 2013 and 48,000 died from HIV-related illnesses in the same year.
Whilst progress has been made, and today 90% of pregnant women know their HIV status, there is still a drop off with testing and treating babies and children.

Samples are currently transported by road, either by motorbike or local authority ambulances. Various factors including the high cost of diesel fuel, poor state of roads and limited distribution schedules have resulted in extreme delays in lab sample transport, constituting a significant impediment for the scaling up of paediatric ART’s effectiveness.
Currently,  the time taken to get from healthcare facility to the lab is 11 days, and time taken to return the results by road can take as long as 8 weeks.

The UAV flights are supported by US company, Matternet, who created the UAV being used in the test, designed exclusively for transportation. After the test flights, the cost comparison with road transport will be done, and if favourable, the second phase will carry out test flights from remote areas of the country.

About Matternet
Matternet has been a leader in the field of drone logistics since its founding in 2011. Working with international partners including WHO and MSF, the company focuses on using new technology to solve old problems, and have focused on providing cutting-edge technology that is easy to use.

About UNICEF
UNICEF promotes the rights and wellbeing of every child, in everything we do. Together with our partners, we work in 190 countries and territories to translate that commitment into practical action, focusing special effort on reaching the most vulnerable and excluded children, to the benefit of all children, everywhere. For more information about UNICEF and its work, visit www.unicef.org.