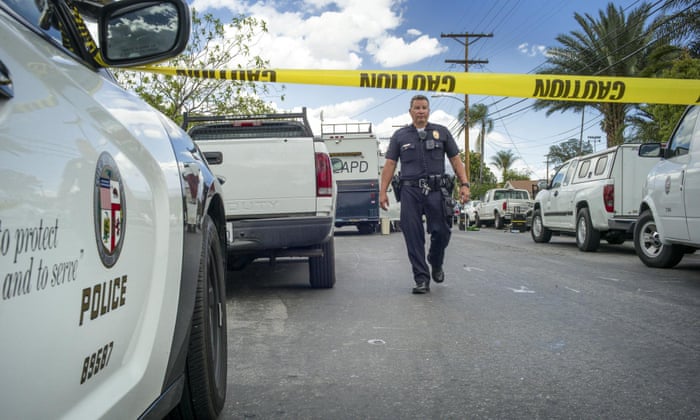 Police in Los Angeles on 29 March 2016 work the crime scene after a man was charged with killing his son for being gay.
Photograph: David Crane/AP

The report, released by the National Coalition of Anti-Violence Programs(NCAVP), found there were 24 reported hate violence homicides in 2015, making it the deadliest such year since 2012.

Even if it were the only such homicide to take place this year, the attack on an LGBT nightclub in Orlando, Florida on Sunday, in which 49 people were killed and 53 injured, would make the 2016 figures 100% higher than those for 2015.

Continuing a trend seen in previous years, people of color and transgender and gender-nonconforming individuals made up the majority of victims considered by the report. The most vulnerable group consisted of transgender women of color – a group that accounted for 54% of homicides of LGBT and HIV-affected people reported in 2015.

The statistics probably do not represent the full scale of violence nationally. The NCAVP collected data from 13 member organizations in 12 states and its findings were based on the resulting 1,253 reported incidents of hate violence against LGBT and HIV-affected people. The reports are based on information either directly from survivors or from public sources.

On Sunday, Barack Obama said of Orlando: “Although it’s still early in the investigation, we know enough to say that this was an act of terror and an act of hate.”

FBI hate crime statistics can provide a more complete picture of how frequently individuals act on their prejudice. In 2014, the latest year of such statistics available, 1,248 individuals were targeted in the US because of their sexual orientation – 18.6% of all hate crime victims.

However, low reporting rates still affect the reliability of these official figures – Monday’s NCAVP report found that only 41% of LGBT and HIV-affected individuals who experienced hate violence reported the incident to the police, down from 54% in 2014.

Negative experiences with law enforcement officials may contribute to those figures – of those who did report violence, 80% said police reaction had either been indifferent or hostile.

In the 2013 FBI crime report, hate crimes motivated by an individual’s gender or gender identity were added as a category for the first time. That year, 25 offenses were anti-transgender and eight were committed against individuals who were gender-nonconforming. The 2014 report shows a significant increase in this type of offense – in total, there were 109 victims of gender-identity biased hate crimes.

Homophobic and transphobic attitudes are common in the US. In a CNN/ORC polllast month, one in four respondents said they opposed “laws that guarantee equal protection for transgender people in jobs, housing and public accommodations”. When faced with the same question about protecting the rights of “gays and lesbians”, one in five of the 1,001 adult Americans who participated in the poll said they were in opposition.

Regular surveys, like those conducted by the National Opinion Research Center at the University of Chicago, point to a growing acceptance of homosexuality. For example, in 1972, only 62% of respondents supported a gay person’s right to speak before a public audience. By 2010, that figure had risen to 86%.

However, that improvement often overshadows the important alternative reading of those same statistics – that as recently as 2010, 14% of American adults felt gay people should not be allowed to speak freely.

Furthermore, the new report from NCAVP shows that long-term trends in hate-violence homicides have not improved. In 2006, the group reported 10 homicides against LGBT and HIV-affected people, substantially lower than the 24 reported last year.