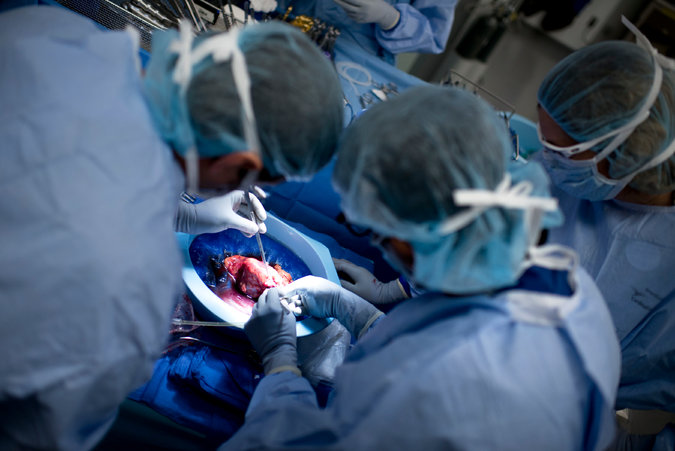 Dr. Dorry Segev, an associate professor of surgery at the Johns Hopkins University School of Medicine, estimated that organs from 500 to 600 H.I.V.-positive potential donors have gone to waste each year and that allowing those donations could save more than 1,000 people.

“That’d be the greatest increase in organ transplantation that we’ve seen in the past decade,” he said in an interview Tuesday.

Since 1988 until November 2013, when President Obama signed the H.I.V. Organ Policy Equity Act into law, medical facilities had been forbidden from such transplants. After receiving approval in January from the United Network for Organ Sharing, which manages the nation’s organ transplant system, Johns Hopkins was prepared to perform a transplant as soon as a suitable organ and recipient emerged, the hospital said.

H.I.V.-positive patients can receive organs from donors without H.I.V., so the addition of the new organs could also bump those without H.I.V. up the waiting list. About 122,000 people in the United States are on the list, Johns Hopkins said.

Patients without H.I.V. would not receive organs from H.I.V.-positive donors.

Giving H.I.V.-positive patients donated organs was once considered unnecessary. The 2013 HOPE Act reversed a transplant ban that was passed in 1988 — a time when AIDS fears were high — as part of an amendment to the National Organ Transplant Act. Dr. David Klassen, the chief medical officer for the United Network for Organ Sharing, said the medical outlook for H.I.V. patients had drastically changed since then.

Because H.I.V.-positive organ transplants have never been done in the United States, medical facilities do not have systems in place to handle them, Dr. Segev said. He anticipated a trickle of transplants at first until those systems are established, with the rate slowly ticking upward.

At least initially, the focus will be on deceased donors, Dr. Segev said. More studies are required to ensure it is safe for an H.I.V.-positive patient to donate a kidney, he said.

Aside from the medical potential, the ability to become an organ donor upon death is welcome news among H.I.V.-positive patients, Dr. Segev said.

“People want to leave a living legacy; they want to help,” he said. “And to be stigmatized and told, ‘You can’t help because you’re H.I.V.-positive’ can be devastating. This removes yet another stigma associated with H.I.V.”

Michael Kaplan, president of the AIDS United lobbying group, has lived with AIDS since 1992 and Type 1 diabetes since 1980. He said in an interview that H.I.V.-positive patients would appreciate having more medical options — and that he suddenly realized he would have to update his own donor information.

“The idea that my organs could now benefit someone living with H.I.V.? Heck yeah,” he said.