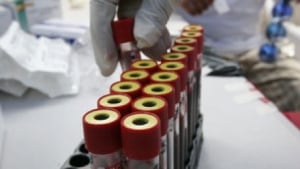 Universal HIV-testing is the best way to eliminate the disease, according to one of the world's leading experts. (CBC )

The best way to eliminate HIV and AIDS in Canada is to test everyone for the virus, regardless of whether they are at risk or not, according to one of the world's leading experts on the disease.

Dr. Julio Montaner, the director of British Columbia's Centre for Excellence in HIV and AIDS, says that in B.C. alone, 2,000 of the 15,000 people with HIV/AIDS don't even know they're infected and so are more likely to spread the virus.

"What we have come to recognize is that there are pockets of people who are HIV infected who are not aware … not only that they're not infected, but not aware of their risk of HIV infection."

It's estimated one in six people have an advanced form of HIV by the time they're diagnosed, and that more than half of new infections are transmitted by people who don't know they have HIV.

"The only way that we can get at them is if we ask all of the people in B.C. to confirm the fact that they're not infected," Montaner said.

"Finding them is critical," said the doctor, who wants universal testing across Canada.

"In finding them, we will stop the epidemic ... By bringing them out, we're able to help them help themselves accessing treatment that is life-saving, but in addition, that stops HIV transmission."

Since 2011, Metro Vancouver hospitals have been offering free voluntary HIV testing to everyone who comes through their doors. And hospitals on Vancouver Island will soon be doing the same.

Last year, the province announced all adult B.C. residents will be offered a free voluntary HIV/AIDS test every five years under an expanded program aimed at preventing transmission of the virus in the province.

There is evidence the province is winning the battle against the virus. B.C.'s HIV infection rate has fallen by 60 per cent since 1996, while rates in other provinces have remained unchanged.

But Montaner said testing could be broader, and more consistent.

"It's not being done to the extent that we would like it to be done," he said. "We want this to become the norm in B.C. and the norm in this country.

"We're asking the rest of the country to embrace this strategy. We need to do it here to show the world that it can be done, and should be done," said Montaner.

He said not only would universal testing save lives, it would also save money, by reducing the amount spent to treat people infected with the virus.

"Why are we saving? Because we are preventing disease progression, premature death, and more important from a financial perspective, the spread of the disease."

Earlier this year Montaner, was inducted into the Canadian Medical Hall of Fame and made an Officer of the Order of Canada for leading the global fight against HIV/AIDS.