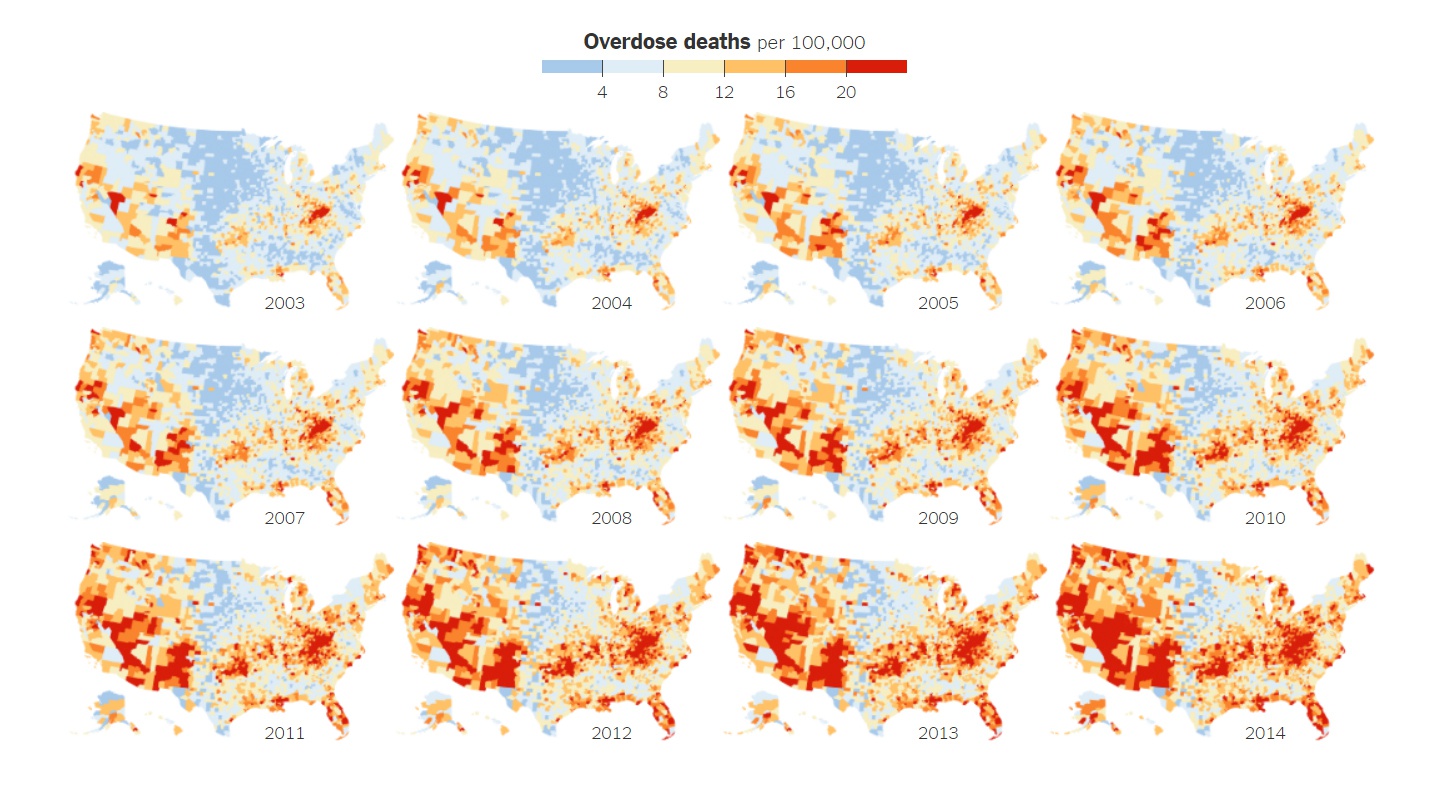 Some of the largest concentrations of overdose deaths were in Appalachia and the Southwest, according to new county-level estimates released by the Centers for Disease Control and Prevention.

The number of these deaths reached a new peak in 2014:47,055 people, or the equivalent of about 125 Americans every day.

The trend is now similar to that of the human immunodeficiency virus, or HIV, epidemic in the late 1980s and early 1990s, said Robert Anderson, the C.D.C.’s chief of mortality statistics. 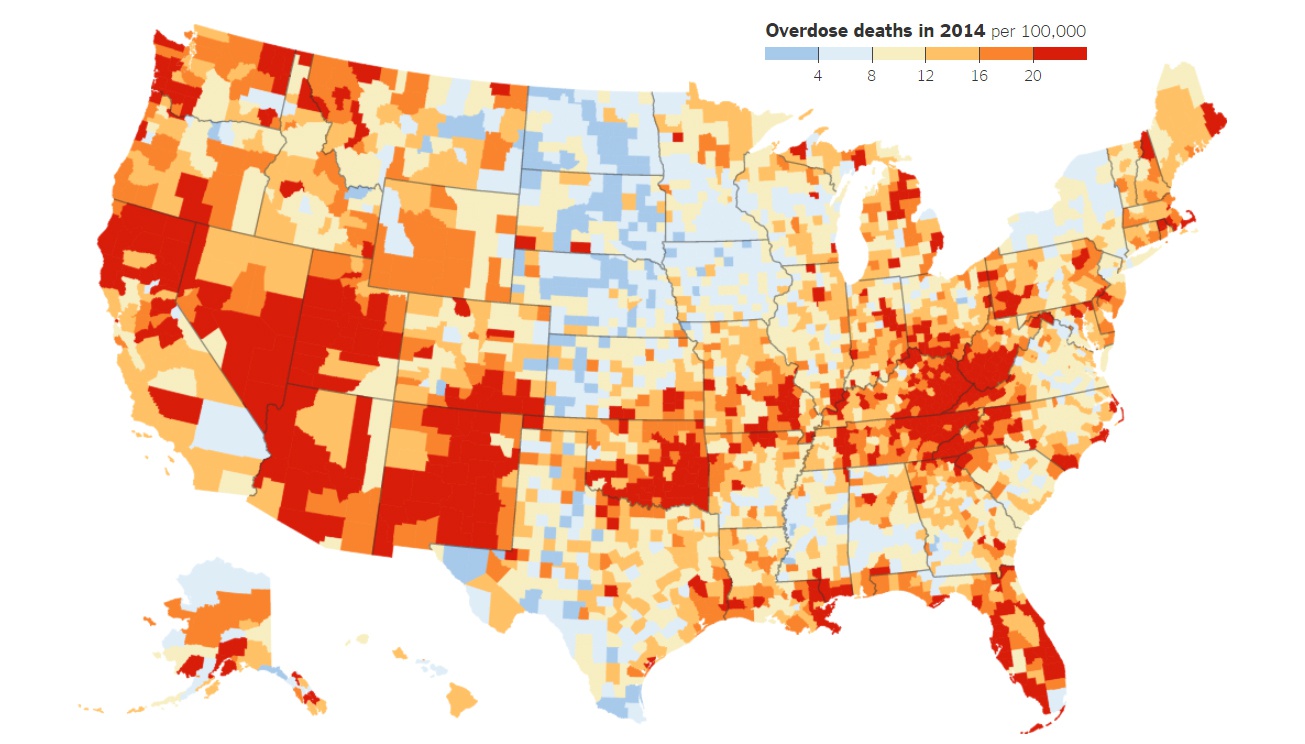 HIV deaths rose in a shorter time frame, but their peak in 1995 is similar to the high point of deaths from drug overdoses reached in 2014, Mr. Anderson said. HIV, however, was mainly an urban problem. Drug overdoses cut across rural-urban boundaries.

In fact, death rates from overdoses in rural areas now outpace the rate in large metropolitan areas, which historically had higher rates.

Drugs deaths have skyrocketed in New Hampshire. In 2014, 326 people died from an overdose of an opioid, a class of drugs that includes heroin and fentanyl, a painkiller 100 times as powerful as morphine.

In New Hampshire, which holds this year’s first presidential primary, residents have repeatedly raised the issue of heroin addiction with visiting candidates.

“No group is immune to it — it is happening in our inner cities, rural and affluent communities,” said Timothy R. Rourke, the chairman of the New Hampshire Governor’s Commission on Alcohol and Drug Abuse.

Most of the deaths from overdose in the state are related to a version of fentanyl. “Dealers will lace heroin with it or sell pure fentanyl with the guise of being heroin,” Mr. Rourke said.

But fentanyl can be deadlier than heroin. It takes much more naloxone, a drug that reverses the effects of an opioid overdose, to revive someone who has overdosed on fentanyl.

Mr. Rourke said that high death rates in New Hampshire were symptomatic of a larger problem: The state is second to last, ahead of only Texas, in access to treatment programs. New Hampshire spends $8 per capita on treatment for substance abuse. Connecticut, for example, spends twice that amount.

Appalachia has been stricken with overdose deaths for more than a decade, in many ways because of prescription drug addiction among its workers.

West Virginia and neighboring states have many blue-collar workers, and “in that group, there’s just a lot of injuries,” said Dr. Carl R. Sullivan III, the director of addiction services at the West Virginia University School of Medicine.

“In the mid-1990s, there was a social movement that said it was unacceptable for patients to have chronic pain, and the pharmaceutical industry pushed the notion that opioids were safe,” he said.

A few years ago, as laws were passed to address the misuse of prescription painkillers, addicts began turning to heroin instead, he said. Because of a lack of workers needed to treat addicts, overdose deaths have continued to afflict states like West Virginia, which has the highest overdose death rate in the nation.

“Chances of getting treatment in West Virginia is ridiculously small,” Dr. Sullivan said. “We’ve had this uptick in overdose deaths despite enormous public interest in this whole issue.”

In New Mexico, drug addiction is being passed to the next generation

While New Mexico has avoided the national spotlight in the current wave of opioid addiction, it has had high death rates from heroin overdoses since the early 1990s.

Heroin addiction has been “passed down from generation to generation in small cities around New Mexico,” said Jennifer Weiss-Burke, executive director of Healing Addiction in Our Community, a nonprofit group formed to curb heroin addiction. “I've heard stories of grandparents who have been heroin users for years, and it is passed down to younger generations; it’s almost like a way of life.”

Ms. Weiss-Burke, whose son died from a heroin overdose in 2011, said it was much harder to treat young people. “Some young people are still having fun and they don’t have the desire to get sober, so they end up cycling through treatment or end up in jail,” she said.

Her center recently treated a 20-year-old man who was sober for five months before relapsing, then relapsed several more times after that.

“When you go right back to the same environment, it’s hard to stay clean,” she said. “Heroin craving continues to haunt a person for years.”