More than a million Russians now live with the virus and that number is expected to nearly double in the next decade, in what has been called Europe's HIV epidemic.

The statistics were revealed in a report by the European Centre for Disease Control and the World Health Organisation, which found that 153,407 people across Europe were newly diagnosed with the illness in 2015. 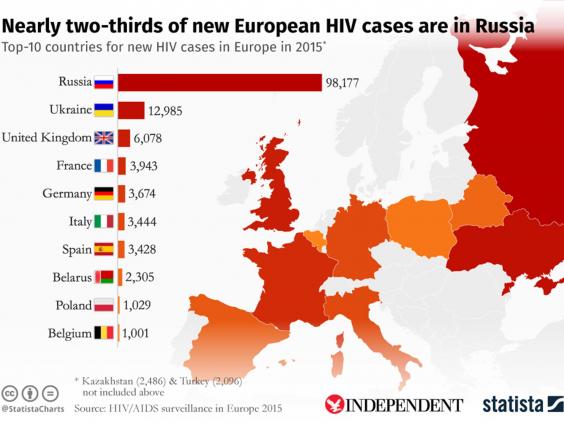 The UK is in third place after Ukraine, with 6,078 new HIV diagnoses in 2015, the latest figures show.

“HIV transmission is still a major concern in Europe," the report warns.

“Despite significant efforts dedicated to the prevention and control of HIV in Europe, the number of new HIV diagnoses has not declined substantially over the last decade in the western part of the region and has more than doubled in the east.”

The report said the increases were being driven mainly by heterosexual transmission in Russia and eastern Europe and in men who have sex with men in western and central regions.

It calls for a new action plan to tackle the “HIV epidemic in Europe and end the AIDS epidemic as a public health threat by 2030”.

But devising a continent-wide health plan will be tricky as the experience of individual countries varies wildly.

Likewise, in Belgium a tiny fraction – less than five per cent – of cases are blamed on injecting drug users, while in neighbouring Luxembourg around 30 per cent of new diagnoses are needle-related.

Aidsmap, which interpreted the findings, said the 98,177 new cases recorded in Russia last year equated to one HIV diagnosis for every 1,493 Russians.

That compared with one diagnosis for every 13,157 people across the rest of the continent.

HIV diagnoses in Russia have more than doubled over the last ten years, up 133 per cent since 2006 and 15 per cent in just a year.