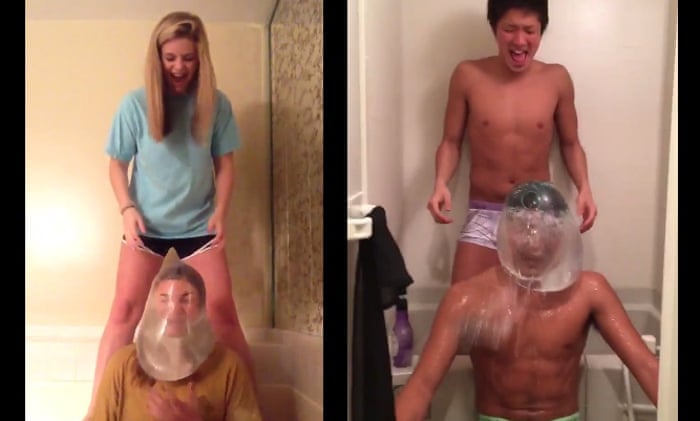 It’s been a trying few weeks, so it’s nice to know that no matter how bad things get, there will always be people who are prepared to be idiots on the internet.

This year’s totally viral trend for recording yourself doing stupid stuff and posting it on the internet began a week ago, when two guys were messing around with a water balloon – before it all went wrong:

The problem is, it’s not a water balloon, it’s a condom. And condoms are a lot stretchier than balloons. And water is quite heavy. And so you can see the issue.

That original video garnered over 9,000 retweets, and soon enough the imitators started.

Some going better than others.

We can’t exactly encourage trying it yourself, because it doesn’t actually look that safe. As a rule, please do not put airtight seals over your mouth and nose, particularly when they are also filled with water. It is a Bad Idea.

But none of that seems to have stopped the rise and rise of the practice. Now named the “condom challenge”, in homage to the Ice Bucket Challenge (which had less risk of death and also actually raised money for charity), there’s already an “official twitter account”, which is a perfectly meaningless phrase.

Even better, it’s not even the first “condom challenge” to hit the internet. In 2013, teens were doing a different condom challenge, which involved snorting a condom. It was even more stupid. Do not do that either.

If you want to get involved in the condom challenge – which, as we have already said, you should not – then it’s best to move fast. Going by the half-life of an internet trend these days, it’ll be dubbed a dangerous new practice by a school district on Thursday, happen live on a BBC chat show on Friday, be responsible for a hospitalisation on Saturday and be the subject of a nostalgic “remember the condom challenge” round-up by next Wednesday.

If you are confused and upset by this new world, just remember: blame teens. It’s always the fault of the teens.