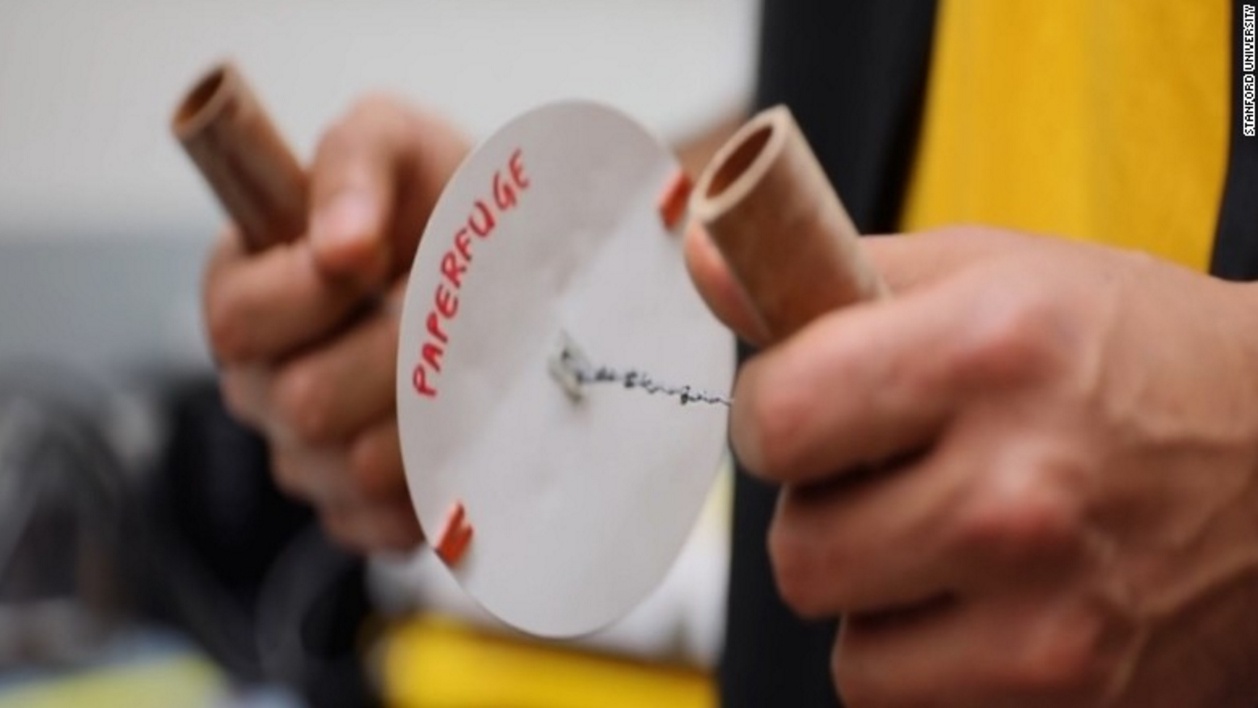 Centrifuges can help isolate and detect low levels of infection, pathogens and parasites in blood, urine and stool samples. But due to their high cost -- upward of a thousand dollars per machine in some cases -- they aren't always available where they are needed most. They also rely on electricity and can't be used in the field.

"A couple of years ago, I experienced a moment in Uganda while talking to primary health workers, which made me realize centrifuges are a critical part of a diagnostics lab infrastructure, and they were missing from most places," Prakash said. "Even places that have them, either they break in the field or, because of no electricity, are not even used. I saw one being used as a doorstop.

"I came back and began looking for a solution that would be human-powered and cost pennies so that a billion people who live with no infrastructure and resources can afford them."

In his lab, Prakash and his students began analyzing yo-yos. Unlike rotating kitchen appliances, such as an egg beater or salad spinner, that are too slow to separate blood, the yo-yo was fast. But it was difficult to master and not practical. Soon, the lab was full of all types of rotating and spinning toys, from tops to gyroscopes to whirligigs.

A postdoctoral student, Saad Bhamla, analyzed a whirligig in motion with a high-speed video. The analysis revealed that the whirligig could spin faster than any other toy they had used in experiments.

This sparked a "six-month marathon" of studying the physics of the whirligig and building a mathematical model to understand it. Three undergraduate students joined the team, and together, they discovered a way to increase the spinning speed to 125,000 revolutions per minute.

"To the best of my knowledge, this is the fastest-spinning rotational motion powered by human hands," Prakash said. The team is so confident in its finding that it has submitted an application to Guinness World Records.

Through trial and error, the team built the Paperfuge, a human-powered centrifuge made of two synthetic polymer paper discs, braided fishing line, wood or PVC pipe for handles, drinking straws sealed with epoxy and shatterproof plastic capillary tubes to hold the blood samples. It cost 20 cents to make. To ensure that the samples wouldn't leak, the researchers used a variety of experiments to "rough up" the Paperfuge, including throwing it out in the street.

When testing the abilities of the Paperfuge, the team was able to show how it separated pure plasma from blood in 1½ minutes and isolate malaria parasites in 15 minutes.

The work was also inspired by another project that Prakash is known for: the Foldscope, an origami paper optical microscope that can be made for 50 cents with a sheet of paper and a simple lens.

Prakash's team was also able to make the Paperfuge out of other materials, like plastic and polymers or through a 3-D printing process. The members have just returned from field testing the Paperfuge in Madagascar, are planning a return trip to further test the tool and will be adding features to do single-step analysis.

"It's crucial to think about democratizing scientific tools to bring them to people all around the world," Prakash said. "All aspects of scientific and measurement tools should be re-examined to see how those fundamental principles can be re-engineered in new forms that are adaptable to a broader context beyond a well-funded lab in an academic settings. People have a lot of hunger for science, so it needs to be accessible."