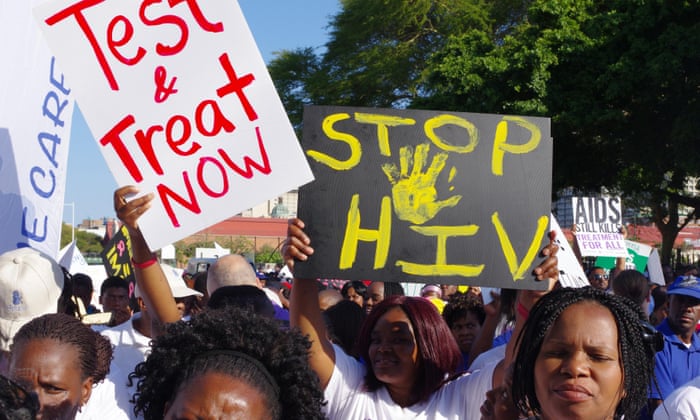 HIV is considered a pandemic in South Africa, where the new trial takes place. Photograph: AP

The first new trial of a potential vaccine against HIV in seven years has begun in South Africa, raising hopes that it will help bring about the end of the epidemic.

Although fewer people are now dying from Aids because 18.2 million are on drug treatment for life to suppress the virus, efforts to prevent people from becoming infected have not been very successful. The infection rate has continued to rise and experts do not believe the epidemic will be ended without a vaccine.

The vaccine being tested is a modified version of the only one to have shown a positive effect, out of many that have gone into trials. Seven years ago, the vaccine known as RV144 showed a modest benefit of about 31% in a trial in Thailand.

That trial was controversial because the vaccine was a combination of two, called AidsVax and ALVAC, which were already 15 years old when it began. One of them, AidsVax, had failed in a trial on its own. The RV144 trial was very large – more than 16,400 Thai men and women without HIV took part, randomly assigned to receive either the combined vaccine or a placebo injection. At the end of the three-year trial, 125 people had become infected – 51 who had received the vaccine and 74 who had not.

But researchers chasing the holy grail of a vaccine think they could have better success in South Africa, because of a number of modifications. The new trial, called HVTN 702, has just begun to enrol the first of 5,400 men and women aged 18-35.

“HIV has taken a devastating toll in South Africa, but now we begin a scientific exploration that could hold great promise for our country. If an HIV vaccine were found to work in South Africa, it could dramatically alter the course of the pandemic,” said Dr Glenda Gray, chief executive of the South African Medical Research Council, which is involved in the study.

“It’s an important trial to do. I’m very pleased that we were able to get it off the ground,” said Dr Anthony Fauci, director of the National Institute of Allergy and Infectious Diseases in the US that is co-funding the trial.

The Thai trial’s modest success was in people at low risk of HIV infection. “We have always said that if a vaccine is going to be ultimately effective, it is going to have to prove itself in a relatively high-risk group. So we always had the intention of extending and extrapolating the principle of the RV144 study to a setting such as southern Africa,” said Fauci.

The aspiration is to push the effectiveness up from 31% to between 50% and 60%, he said. “Obviously we’d like it to be 90% but that is probably asking too much given the complexity of HIV and the body’s immune response to it,” he said. If they could get a vaccine of at least 50% efficacy for use in combination with other prevention tools, such as condoms, antiretroviral drugs and circumcision, “that will be a major, major advance”, he said.

The modified vaccine uses an isolate of the virus that circulates in southern Africa, called the C clade. There will be more booster shots of the vaccine and the use of an adjuvant to enhance the response of the immune system. Volunteers will get five shots of the vaccine and three boosters – a schedule that the researchers will look to slim down for use in the real world if it is successful.

Prof Linda-Gail Bekker, of the University of Cape Town and president of the International AIDS Society, who is also involved in the study, said the result from the Thai trial, although only 31% “made those of us in the HIV vaccine world quite excited”. For the first time, it looked as though a vaccine was possible.

“Pretty soon after the trial, the world started to galvanise to decide what we needed to do,” she said. The epidemic in Thailand was abating, so with a low rate of new infections, it was not the best place to study the vaccine further. “We recognised we had to come to southern Africa to do the trial, so we had to modify the vaccine product.”

The aim of the new trial is to produce evidence for the regulators and obtain a licence for a vaccine. “Probably the magic number is 50% at three years,” she said. “I think nobody will be very interested in a vaccine that is less than 50%.” A vaccine with lower efficacy could be a problem if people assume they are protected and take no further precautions against HIV. But a vaccine with 50% efficacy could make a big impact, she said.

At least two-thirds of the participants will be women, who are more likely to get infected at that age than men. “The toolbox is in desperate need of something like this. We remain very optimistic,” said Bekker. “We are constantly aware of the desperate need and very excited that we are finally getting on and trying something again now.

“We’ve never treated our way out of an epidemic. There’s no doubt we have to have primary prevention alongside treatment in order to get HIV control, but we are not going to get HIV eradication without a vaccine. That is very clear.”