The training is organized according to the NATO standards and is supervised by American and Ukrainian instructors, each of whom has considerable experience of medical practice in special forces engaged in combat operations.

Students practice situations of prolonged autonomous work of a combat unit and forced extended care on the battlefield (delayed evacuation).

A separate module is devoted to practice of the skills learned during the training on a training grounds in conditions as close to real combat situation as possible.

Course program is transforming every time depending on the time that combat medics can leave their service in units and on the level of training of the participants. But it is always adapted to the specific character of trauma and wounds that Ukrainian doctors see in the ATO zone.

Students practice situations of prolonged autonomous work of a combat unit and forced extended care on the battlefield (delayed evacuation). Training program includes skills on airway management, chest injuries, work with manikins, IV and injections practice. There is obligatory hands-on on fractures and abdominal injuries, spinal and head injuries, hypothermia cases. There are classes on medications usage, ergonomic packaging of a tactical kit is practiced.

This is the third training that is done within the project in Dnipropetrovsk region which shows how strategically important it is for training staff who is responsible for saving lives and health of our soldiers at war. Dnipropetrovsk region was the first location after Kyiv where in Oct 2014 two training cycles were conducted with more than 100 students. Another training took place early December in Cherkasske town. 150 students took part in the training, 85 of whom received certificates confirming that they took the full training course. 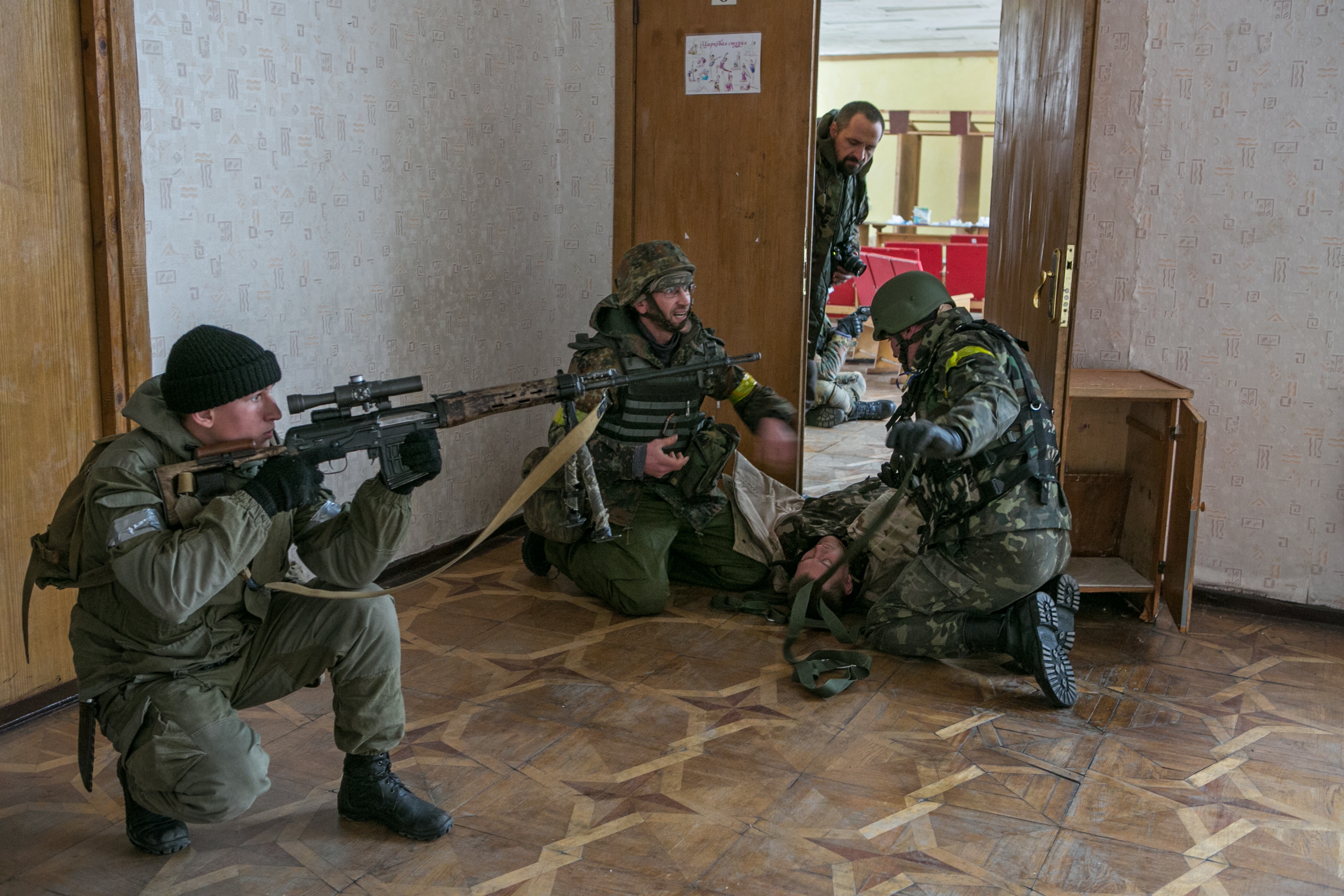 In three months of project’s work more than thousand military medics from went through Medsanbat training system in all regions of Ukraine. Trainings are done in hospitals in static rooms as well as in mobile field hospitals, on training grounds where the units taking part in the ATO are deployed.

Registration to all trainings is open and transparent – either via Facebook page (www.facebook.com/medsanbat), via the project website (www.medsanbat.info) or via phone if military doctors are in the battle zone and don’t have Internet access. Still most students are sent by the Ministry of Defence or by the coordinators of antiterroristic units.

In three months of project’s work more than thousand military medics from went through Medsanbat training system in all regions of Ukraine.

Combat medics who were deployed or returning to the ATO after completion of the full course following the decision of instructors were issued 50 medic begs, fully equipped with drugs and medical tools according to the NATO standards to provide first aid in combat situations. Another 50 bags are being packaged and shipped into Ukraine now.

November 2014, a project was started on Ukrainian Philanthropic Marketplace that will enable to raise charitable donations for 100 medic bags that till help medics provide fast and effective care to the injured soldiers on the battlefield. Combat Medic Bag Level II, packaged according to NATO standards performs the same functions as the medical bag that the Medsanbat students going into the combat zone were receiving. But its equipment, light weight and mobility will enable combat medics to provide first aid in combat conditions in more operative fashion. It is of critical importance because of the difficulties and major risk that is associated with evacuation of the injured from the battlefield sometimes hospital medical care is delayed to 12 hours instead of the required 60 minutes. In such conditions providing qualified and timely care in the hot zone is the key factor that influences survavibility in combat conditions.

To support this project it is enough to go to www.ubb.org.ua and choose the way of donating that is most convenient for you – one of the many suggested on UPM platform.

Created back in 1798 today this hospital is the largest regional medical treatment facility in Ukraine, its territory is 15hectares. It comprises forty highly specialized inpatient departments with a powerful diagnostic base. Personnel of 2,500 provides continuous treatment for 1,175 patients. Hospital surgeons are doing 17 thousand operations a year. 38 thousand patients get aid during a year. 75 doctors of 42 specialties of the regional consultative policlinics are providing thousands of consultations daily.

For more than six months the hospital has been providing care to warfighters injured in the ATO. Since May 9 they received 753 patients who spent more than 6,000 days in the inpatient departments of the hospital. The most critical patients, mostly directly from the frontlines and without qualified pre-hospital care were coming in June-July (they were receiving only self-aid and buddy-aid). Later in August-September the surge of such patients slowed down. Nowadays almost all patients from the battlefield come to the hospital after they have been treated for shock, transfusion therapy and emergency interventions in MFHs. The structure of injuries: gunshot fractures of extremities; penetrating thoracoabdominal injuries; barotraumas from explosive wave, brain GSW, spinal injuries, burns, multiple injuries. A high number of casualties is coming in traumatic and hemorrhagic shock.

State of Medical Care in the ATO

According to the assessment of independent experts the system of medical care on the battlefield in the ATO does not meet the key requirements used in NATO army and in Israel. Mobile and field hospitals do not meet international standards, most of their equipment is outdated and does not meet basic requirements, especially in the situation when the load on one mobile hospital is up to 300 surgical operations a month. Evacuation of the injured from the battlefield is associated with great risk, evacuation to hospitals is complicated and medical aid is sometimes delayed up to 12 hours instead the necessary 60 minutes. Providing soldiers with individual aid kits, trained doctors with necessary medicines and medical equipment and the existence of a system of evacuation and transport of the wounded to mobile and static hospitals mortality among the military contingent can be reduced significantly and health saved to thousands of defenders of Ukraine.