In the appeal, the musician declared his love for Ukraine and his sincere affection for Ukrainians and called for making HIV testing available, fighting discrimination against HIV-positive people and providing them with the necessary support and assistance.

The singer's letter, available to readers both in print and on the website of the newspaper, was published with the assistance of the Elena Pinchuk Foundation, a long-term partner of the Elton John AIDS Foundation.

As I write, 37 million people around the world are living with HIV. Last year alone, 1.8 million people newly contracted the disease and 940,000 died of AIDS.

This need not happen.

Today's medicines not only enable those living with HIV to have full and fulfilling lives, but also ensure they cannot pass the virus on to others.

The challenge is that too many people still do not realise they are at risk, are too afraid of the stigma or are denied the chance of taking an HIV test.

That is why we are raising awareness in cities around the world to combat the shame associated with HIV; to promote safe, affordable testing; and to help link people who need HIV treatment to the right care.

In this, its 30th year, the theme of World AIDS Day is 'know your status'.  Why?  Because everyone should understand the risks of HIV, and everyone who needs it should have the chance of dignified help and support.  That can only happen if we know our status.

I love Ukraine and know Ukrainians to be decent and kind.  I believe Kiev and the cities of Ukraine can make HIV testing normal and break the stigma that still surrounds the virus.  I believe we can reach all those living with, affected by or at risk of HIV / AIDS.

Let’s get them the help they need and ensure no one is left behind, wherever they may live and whoever they may be. Zupinimo Snid Razom!

With tons of love and thanks, 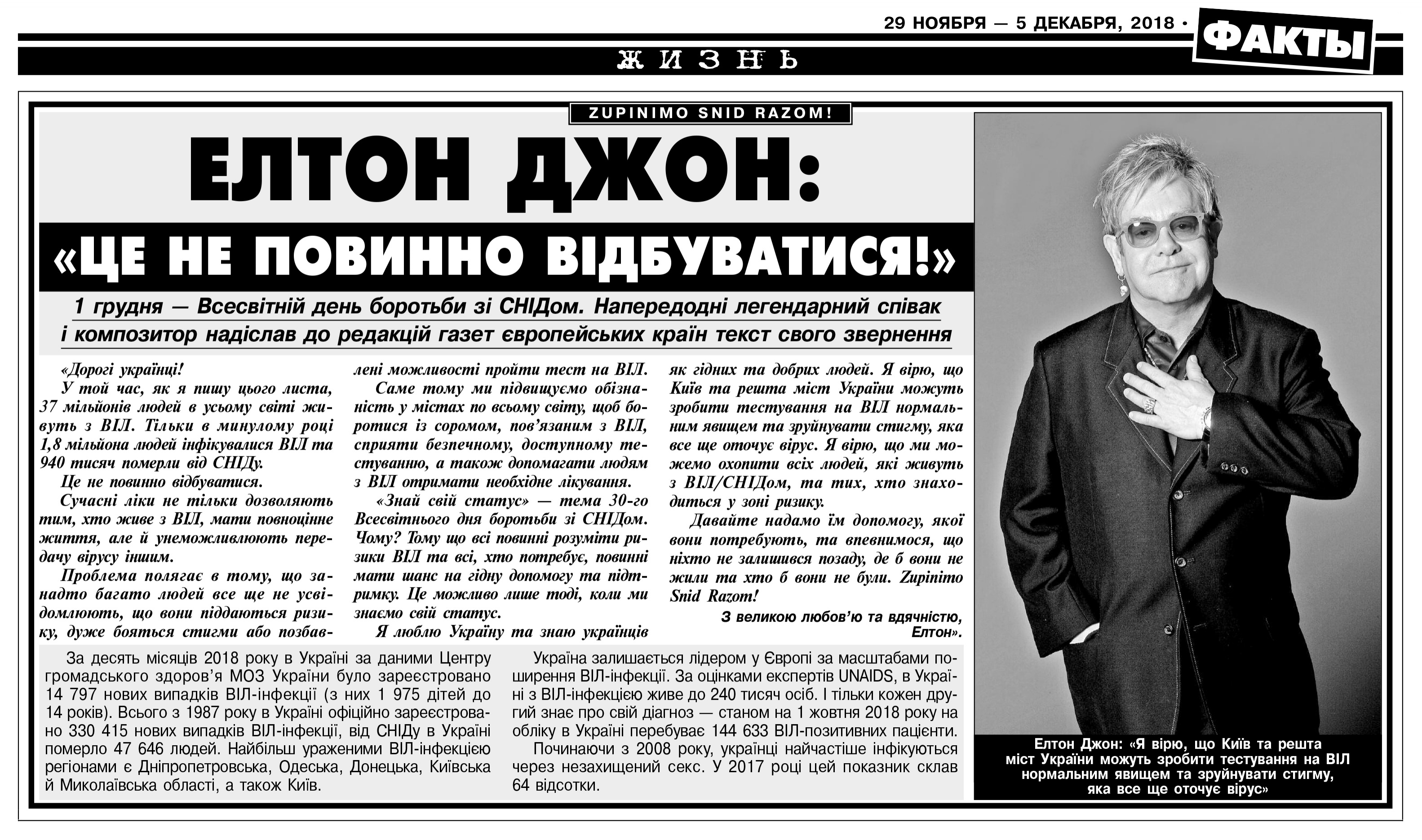 Year 2007. The first charity concert, dedicated to the fight against AIDS in Ukraine took place on the Independence Square in Kyiv. Over 200 thousand Ukrainians came to listen to the famous musician. Live broadcast of the concert was watched by about 5 million viewers.

Year 2012. The day before EURO 2012 Finals legendary musicians Elton John and the Queen with Adam Lambert have performed on the main square of Ukraine. The concert was organized by the Elena Pinchuk Foundation and dedicated to the fight against AIDS. 250 thousand people were listening to that performance on the Independence Square and adjacent streets, as well as 17 million TV viewers.

Year 2013. The "Fair Play" Project began to work in Ukraine. This Project helps communicate information about HIV/AIDS to Ukrainian children and teens through the rules of the football game. The Project was launched with the help of the charity donations made by the VIP guests at the concert in 2012.

Year 2014 Social apartment for the temporary boarding of pregnant girls and young women who were in difficult life circumstances was opened in Kyiv. It operates with the help of the Elena Pinchuk Foundation and the Elton John AIDS Foundation joint project.

Year 2018 A special charitable event in the framework of the Kurazh Bazar festival took place at the Art-Zavod Platforma in Kyiv. Elton John – the legendary singer and founder of the Elton John AIDS Foundation was a guest of this event at the invitation of the Elena Pinchuk Foundation. 4 500 people attended the event during the day. Majority of visitors participated in an educational program aimed at healthy lifestyles and safe behavior. The culmination of the day was the appeal of the famous musician to the Ukrainians, organized by Radio Hit FM, and Sir Elton's interview with the Radio host. Almost 900 thousand people listened to the radio broadcast live. Overall, 2.4 million listeners tuned in to the Radio broadcast on that day. The day was devoted to the AIDS issue.

Statistics on HIV/AIDS in Ukraine

According to the Public Health Center of the Ministry of Health of Ukraine, during the ten months of 2018 – 14 797 new cases of HIV infection were registered (1 975 of them are amongst children under 14 years old). Altogether 330 415 new cases of HIV infection were officially registered in Ukraine since 1987. Since 1987 – 47 646 died from AIDS associated diseases in Ukraine. Ukraine keeps the leading position in Europe in terms of new HIV infection cases. According to UNAIDS experts’ assessment about 240,000 people in Ukraine live with HIV/AIDS.

The Elton John AIDS Foundation (www.ejaf.com) is one of the world’s leading international not-profit organizations working year-round to support those affected by HIV. We believe AIDS can be beaten and work alongside a range of local projects, organizations, government officials, celebrity patrons and brand partners to make this a reality. In the last 25 years, via a range of fundraising initiatives, we have raised more than £220m. For every £1 we raise, we have secured an additional £1 from other donors and partners.  We use these funds to fund frontline programs that help to alleviate the pain of those living with, affected by or at risk of HIV/AIDS. We measure our success by our ability to prevent HIV infection, provide treatment, end discrimination and drive social and political change.

The Elena Pinchuk Foundation (www.antiaids.org) was founded in September 2003. In December 2017 the Foundation announced that the fight against AIDS won’t be the only direction of its activities. In this regard, the word "ANTIAIDS" will no longer be the part of the name of the organization. But fighting the HIV/AIDS epidemic will remain one of the priority issues of the Foundation. The main focus areas of the Foundation will be the fight against AIDS and a healthy lifestyle; mentorial and educational projects aimed at young girls and women; attraction of the best international experience in the humanitarian sphere to Ukraine.