There are also several months of no data available from Donetsk and Luhansk regions. Since the summer of 2014 data from these regions has not been provided on the regular basis. Dnipropetrovsk, Odesa and Donetsk regions, as well as Kyiv remain the most affected.

These regions have the largest number of HIV, AIDS cases and deaths caused by AIDS among all regions of Ukraine. The most common ways of HIV/AIDS transmission in 2020 remain unprotected sexual intercourse - 8 098 people, including 328 homosexual and 7 770 heterosexual. The parenteral way concludes 5 083 cases. 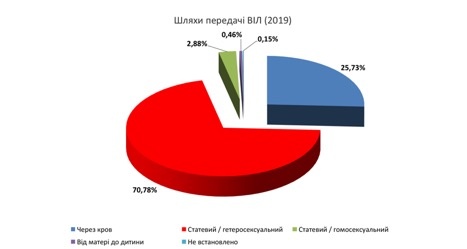 The number of HIV-positive people in Ukraine has been growing every year, but since 2005 the increase in new HIV cases (accelerating the epidemic) has been slowing down every year: in 2005 compared to 2004 - plus 15.6 percent, and in 2011 compared to 2010 - just plus 3.4 percent. In 2012, for the first time in the history of Ukraine, the HIV/AIDS epidemic slowed down - according to official statistics in 2012 the rate of HIV infection (the number of new HIV cases) was lower than in 2011. This is the result of the national programs for vulnerable groups and large-scale information campaigns on HIV/AIDS prevention.

Due to the reduction of AIDS programs in 2013-2017, the epidemic began to grow again. According to experts, since 2014 the epidemic situation in our country has deteriorated rapidly. One of the main indicators of the epidemic is the number of new HIV infection cases. In 2017, this figure increased by 6.6 percent compared to 2016 - this is in line with the dynamics of the epidemic, which was observed about 10 years ago. In 2018, for the first time, the spread of the epidemic was reduced (by 0.52 percent) according to the new statistical basis - excluding data from the Crimea and areas of Donetsk and Luhansk regions not controlled by Ukraine.

Although the number of reported HIV infections in Ukraine is steadily increasing, one in three HIV-positive people still either don’t know their HIV status or don’t receive any medical care and therefore don’t receive antiretroviral therapy. To achieve the goal of increasing the proportion of PLHIV who know their status to 90% in 2020, 56 thousand HIV positive people have to be diagnosed and registered in the medical observation system.